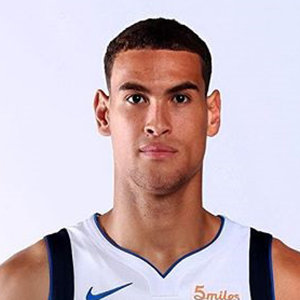 No one can deny the sportsmanship of Dwight Powell, who is a Canadian professional basketball player for the Dallas Mavericks. Kickstarting his basketball career since a young age, Dwight took his progression to the new height along with the honors like Pac-10 All-Freshman Team, Pac-12 Scholar-Athlete of the Year, and a Pac-12 All-Academic Honorable Mention selection.

Dwight also has played multiple games for the Maine Red Claws of the NBA Development League.

On the contrary to Dwight's peaking NBA career, his love life is a total mystery. He has managed to conceal his personal affairs and romantic flings. With an uncovered story of Dwight, the information about whether he has a girlfriend or not lies under the carpet.

Till the date, no such records of his romances have swirled in the media. Also, he has not given any clue about his possible dating life. Nonetheless, concerning his concealed romantic affairs, he is believed to be single currently, with no traces of his love interests and girlfriend.

Dwight's career in basketball started in his academic years at IMG Academy in Bradenton, Florida. After his senior years, Rivals.com considered him a five-star recruit and was the eighth power forward and the twenty-fifth player in the nation in 2010.

From 2010 to 2011, Dwight had his college-level career at Stanford, where he earned Pac-10 All-Freshman Team honors.

After three years, his professional career in basketball started as Charlotte Hornets selected him in their 45th pick in the 2014 NBA Draft. In the same year, he joined Cleveland Cavaliers for the NBA Summer League. Born in 1991, in Toronto, Canada, Dwight Powell celebrates his birthday on 20 July. The body measurements of the professional basketball player of the National Basketball Association (NBA) include his height of 6 feet and 10 inches and weight of 240 lbs (108.9 kg).

He pursued his education from IMG Academy and Stanford from where he initiated his basketball career.

Dwight was born to a mixed family where his parents, Harlan Powell and Jacqueline Weir, had the background of Canadian and Jamaican ancestry. He is the only son of his parents; thus, he has no brother or any siblings. Harlan and Jacqueline had split when Dwight was at his very young age. Also, he is the grandson of Rupert Weir and Daphne Davis from his mother's side.

His late mother, Jacqueline, died on 13 September 2012 due to breast cancer at the age of fifty-three. As per the documents, cancer had spread over Jacqueline's liver, which became the reason for her unexpected demise.