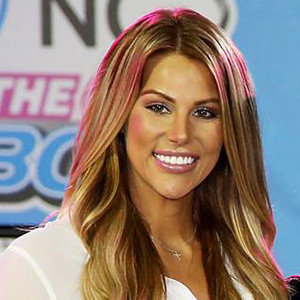 The spotlight was beamed on NFL cheerleader Whitney Ward after she tied the knot with famous NASCAR racer Austin Dillon in December 2017. She is the cheerleader of the Tennessee Titans and successfully predicted the victory of her husband during 2018 Daytona 500.

She became one of the seven new cheerleaders on Titans along with the ladies who had their college degrees and Ph.D.

NFL cheerleader Whitney Ward and NASCAR racer Austin Dillion celebrated their first anniversary on 9 December 2018. The couple celebrated their anniversary with an eye-popping photo shot in the desert. In Whitney's official site thebffblog.com, she defines that she and her husband found a quick happy marriage involving the things that made each other happiest.

Their 'rustic glam' themed wedding ceremony of 9 December 2017 came shortly after their engagement during a trip to the Bahamas in August 2016. The celebrity wife covered every detail of her wedding with Austin on her official blog.

The couple chose Childress Vineyards in North Carolina as their venue. Her professional NASCAR racer husband Austin initially wanted to marry in the snow of Montana, but they skipped the place and chose Vineyards instead. For her bridesmaids, she chose champagne gowns by Mac Duggal. Adorable children Kinsley, Tay Tay, Chapel, and Ellison served as the flower girls and wore the custom-made dress. Whitney Ward and her husband, Austin Dillion, on their wedding on 9 December 2017 at Childress Vineyards in North Carolina (Photo: Instagram)

When Whitney enrobed a luxurious Pnina Tornai Couture gown, Austin had no clue what his ladylove donned during their magical day. He also shined in the black suit from Stitched marked with their engagement photos imprinted inside. Guest savored the four-stair wedding cake consisted of the flavors of strawberry, chocolate, lemonade, and oreo.

What Is Whitney's Job And Net Worth?

Celebrity wife Whitney Ward, age 29, assembles the net worth as an NFL cheerleader. As per The Richest, NFL cheerleaders generally earn $70 to $90 per game, and some cheerleaders receive a monthly salary between the amount of $1000 to $1,500. While Whitney was a student at the University of Tennessee-Chattanooga, she was a cheerleader and captain, and upon graduation, she is fulfilling the job as the cheerleader of the Tennessee Titans.

She also relishes the net worth of $12 million garnered by her professional NASCAR racer husband, Austin Dillion. He is one of the prominent racers of NASCAR and has won 2011 NASCAR Camping World Truck Series championship, 2012 Nationwide Series Rookie of the Year, 2013 NASCAR Nationwide Series championship, 2014 Daytona 500 pole, 2017 Coca-Cola 600, and 2018 Daytona 500.

Whitney and Austin reside in a 2,300-square-foot barn situated on the edges of woods at Lexington. The barn belonged to Austin's RCR general manager father Mike, who built the place in 2010. After Whitney came to the Dillion family, the barn got some changes as the entertainment stage got removed and 'Mr. & Mrs. Dillon' welcome mat got placed in the front entrance.

Whitney Ward is a native of Lewisville, North Carolina and her date of birth is 19 August 1989. She was born to her parents Shawnee and Rick Ward. Whitney stands taller than her husband Austin Dillon who has a height of 1.72 m.

As per wiki, she studied Communications major and marketing minor graduating from the University of Tennessee-Chattanooga.