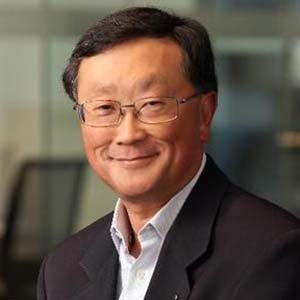 John S. Chen is one of the successful British-American businessmen who works as the CEO of Blackberry. He is a board member of the National Committee on U.S.-China Relations and served as a board of directors of The Walt Disney Company, Wells Fargo, and Bpoar.

Blackberry CEO John S. Chen's wife Sherry Hsi Chen prefers Samsung over Blackberry. In November 2014, during his interview with the Financial Times, John said that he had to tell Sherry to stop displaying her Samsung phone at the parties as it was embarrassing him. While they attended a couple of parties, his wife took out Samsung, and the guests humorously looked at him.

Though he talked with Sherry to use Blackberry, she embarrassed him by saying that she favors her Samsung. The head of a giant company became mortified as his family preferred the rival gadgets and he struggled them to convince that Blackberry devices were better than the others.

When he got asked whether Sherry sneaks with her Samsung or not, John replied that there might be lots of secret of his wife that he doesn't know. The couple has a daughter named Jacqueline Pei-sze Chen who got married to Aaron Michael Stanton in October 2015. Jacqueline and Aaron tied the knot in a nondenominational ceremony at the Monterey Peninsula Country Club in Pebble Beach, California. John's daughter, who is a graduate of the University of California, works as a social media manager in Adobe Systems in San Francisco.

Know About John S. Chen's Salary And Net Worth

John, age 63, summons the net worth from his career as a British-American businessman. When BlackBerry named him as the company's interim CEO in 2013, the documents showed that he received an annual salary of $1 million and a bonus worth $2 million.

In March 2018, John signed a new contract where he gets a salary of $3 million per year and an additional bonus; a total of $15 million. The press release also announced that he would remain chief executive of Blackberry through atleast November 2023.

Born to poor Chinese parents on 1 July 1955, John S. Chen is a native of Hong Kong, China. He attended La Salle College in Hong Kong, and after moving to the United States, John completed his high school education from Northfield Mount Hermon School in Massachusetts. In 1978, the businessman graduated from Brown University obtaining a B.S. degree in Electrical Engineering. John has a master's degree in electrical engineering from the California Institute of Technology.

The CEO of Blackberry stands at a decent height and holds dual nationality (British and American). His ethnicity is mixed (Chinese, Asian, and probably others). For his work, John received Ernst & Young Entrepreneur of the Year for Northern California in July 2007.