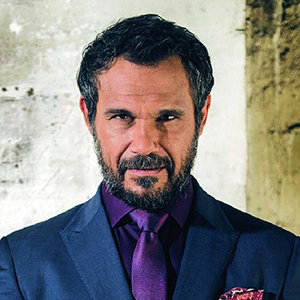 Australian actor Aaron Pedersen is notable for his magnificent and outstanding performance portrayal in the TV series, The Circuit and Mystery Road. It's been two and a half decades since he has been entertaining the audiences through his movies and TV shows. But, the journey wasn't easy for Aaron.

Aaron worked as a journalist at the Australian Broadcasting Corporation(ABC), former Melbourne studios at Ripponlea, for seven years before venturing into the acting world.

His mother was an alcoholic, so they grew up moving back and forth to foster home and their mother. Growing up, Aaron had to face his mother's alcohol abuse and violence as a part of their daily life. Aaron had to make sure of how he and his seven siblings could survive in such a harsh environment where their mother couldn't even provide basic food and clothing.

Things were more difficult in Aaron's life—he had to take extra care of one of his younger brothers, Vinnie, who has an intellectual disability and cerebral palsy.

Contemplating his life journey with his brother, Aaron even wrote and co-produced a short documentary, My Brother Vinnie, in 2006. The documentary covered the bond between Aaron and his intellectually disabled brother Vinnie who he referred to as his second shadow.

Who Is Aaron Pedersen Wife?

The 48-year-old actor, Aaron Pedersen's current relationship status is obscure. He is not married at the moment.

However, in the past, he was once married to a lady named Lisa Sherman. Aaron and his partner Lisa Serma shared the wedding vows in 1999. But, the couple’s relationship didn’t last much longer; they decided to head their separate ways after just one year of marriage and divorced in 2000.

Two years after his departure with his wife in 2002, Aaron was speculated to be dating producer Sarah Bond. She even helped out Aaron to take care of his brother Vinnie as Sarah treated Vinnie like her brother.

Aaron and Sarah had even thought about not bringing children of their own to this world as it would result in giving second priority to Vinnie. Aaron with his ex-girlfriend Sarah and brother Vinnie (Source: aussiecelebs.com.au)

The happy family of three were a perfect and complete package before things went sideways. The pair decided to separate from each other in August 2017.

Keep Exploring: Who Is Lindsey Russell? Her Age, Partner, Family, Net Worth

The Australian actor debuted in the film industry from the mini-series Heartland in 1994. Later, he had his first major acting role in Wildside in 1997.

Alongside that, Aaron also appeared in the movies like Dead Heart(1996) & Killing Ground(2016).

For his greatness, Aaron was also awarded the ‘Film Critics Circle of Australia Award’ and ‘Australian Film Critics Association Award’ in the Best Actor category for his impactful performance in drama-thriller Mystery Road(2013).

Aaron was born on 24 November 1970 in Alice Springs, Australia.

On his physical features, he stands at the height of 1.8m(5 feet 11 inches) with a modest built and weight.