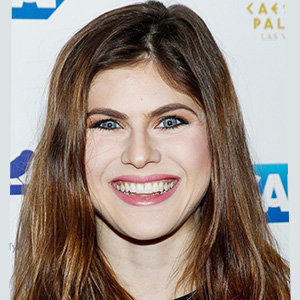 American actress Alexandra Daddario wanted to enter the entertainment industry from a pretty young age, but she got a chance to show her skills at the age of 16 from the romance-mystery All My Children.

She was nominated for the' Teen Choice Award' for her role in the movie Percy Jackson & the Olympians: The Lightning Thief in 2010, and 2015 for her role in San Andreas. She was also an 'MTV Movies Awards' nominee in 2013 for her feature in Texas Chainsaw 3D.

Alexandra was engaged to her Percy Jackson co-star Logan Lerman in 2016. But the relationship didn't last long, and they decided to go the separate ways. The reason for their split is a mystery till date.

Moving on, in May 2017, she was rumored to be dating her Baywatch co-star Zac Efron. However, she confirmed that the two of them are nothing more than just good friends.

After rumors with Zac, her dating life was obscure for a specified period. But as of 2019, she is dating Emma Watson’s ex-boyfriend Brendan Wallace. Her boyfriend is an entrepreneur and managing partner of Fifth Wall Ventures. Alexandra with her boyfriend, Brendan in April of 2019 (Photo: dailymail.co.uk)

The couple started to be seen together from April 2019. They were also spending quality time on their vacation to Italy, Rome on July 2019. The beautiful actress may have finally found her knight in the silver linings. Although she has been engaged once, Alexandra has never been reported of getting married or ever having a husband.

The New York native was born to her parents, a prosecutor, Richard C. Daddario and a lawyer mother, Christina Daddario. Her family ethnicity tracks its roots back to Italian, Hungarian, Irish, English, and German ancestry.

She also has two younger siblings in the family a brother Matthew Daddario and a sister Catharine Daddario. Her brother is also an actor known for his role as Alec Lightwood in drama-fantasy Shadowhunters. Her sister gets acting credit for sci-fi horror Lake Artifact and Donna.

The American actress career in the entertainment industry has been quite fruitful. She made a considerable impact and managed to climb the ladder to stardom in a short period from her strong presence and magnificent performance.

After debuting on the big screen from a minor role in The Squid and the Whale in 2002, she has been part of many acclaimed movies and TV shows. Along with her career, she featured in films and TV series like The Babysitter, Hall Pass, San Andreas, Burying The Ex, The Choice, Baywatch, The Layover, Rampage, Lost Transmission, Law & Order, White Collar, New Girl, and True Detective.

There is no doubt that her career in the industry has garnished immense fame and wealth in her life. Her net worth, as of 2019 is estimated to be an exaggerating the amount of $8 million.

Alexandra was born on 16 March 1986 in New York City, the USA with the birth name Alexandra Anna Daddario. She attended the Professional Children's School in New York. But, she later shifted to Brearley School at the age of sixteen to focus on her acting career.

On her physical notes, she stands at the height of 1.73m(5 feet 8 inch) with average built. She weighs approximately 61 kg with the measurement of 35-27-34 in inches and 59-68.5-86 in centimeters. She has naturally dark brown colored hair with beautiful blue eyes.