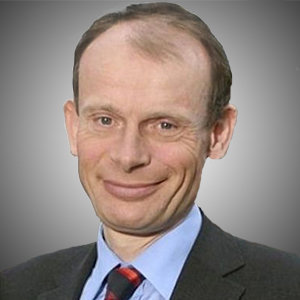 Andrew Marr had a colorful history of affairs with multiple women at different period of time. Despite knowing about his history with women, his wife kept her share of the wedding vows and helped the TV star in his illness recovery, fulfilling the role of a committed partner.

British Political Commentator, Andrew is mostly known for his tenure with the British Broadcasting Corporation (BBC). He is also the recipient of Columnist of the Year honors along with What the Papers Say Awards and the British Press Awards in 1995.

Wife Took Care Of Him Despite Extramarital Affairs

The 59-year-old reporter is married to British politicians, Jack Ashley and Baron Ashley’s only daughter, Jackie Ashley. The couple had their nuptials in August 1987 and shares three children Isabel, Harry, and Emily Marr from their relationship.

His wife, an English journalist, and broadcaster, took nine months break to take care of her husband after he suffered a stroke back in 2013. Andrew suffered a stroke in early January 2013 after a strenuous workout that led him to take a nine-month break from his Sunday morning show.

Jackie’s unconditional love for Andrew had remained as vivid as it was in the past in spite of numerous claims of infidelity against the political analyst. In 2003 there were rumors of him having another child from his extra-matrimonial affair. He was alleged of having a baby daughter with an anonymous reporter, but a DNA test in 2010 falsified the claims of him being the biological father of the unnamed child.

His other affair includes kissing a female TV Producer outside a bar in Fitzrovia on 8 September 2012. He was heavily drunk at the moment and in his defense claimed that he felt embarrassed annoyed with himself that she was leaving and tried to part with a goodbye fleck. Despite knowing her husband’s affair with various women, Jackie still stands behind her husband and has fulfilled her share of responsibility of being a wife.

Kidney Cancer Led Him To Take Break In 2018

Andrew's health suffered another scare in 2018 when he was diagnosed with a malignant tumor in 2018. He had to undergo a surgery to remove the malignant tumor on his kidney in May 2018.

The reporter addressed the viewers in his Sunday show about the illness and notified about his absence from the show so as to gain a full recovery from his cancer.

The reporter’s illness came five years after he suffered from a stroke.

How Much Is Andrew Marr’s Net Worth?

Andrew summons his net worth from his Journalism career that has spanned over three decades now. The anchor gathered a handsome remunerative paycheck as the former host of BBC’s Sunday Morning show, The Andrew Marr Show.

The correspondent gets £400,000 in yearly salary from the BBC Network making him one of the most paid journos on BBC's books. To justify his illustrious paycheck, Andrew in his 2017 interview for Irish News told that he rejected higher paychecks from other broadcaster’s to stay at BBC. He also confirmed the reporter, Michael Cove of getting, a salary of £400,475 from the network.

Andrew on his another interview for the Dailymail in October 2017 revealed that reporter, Jan Moir did not deserve the whopping salary of £400,000 per year from the BBC. According to him, there was no need of journalists working inside the newsroom getting paid a whopping salary as they did very little compared to field workers.

He also expressed he would happily take a pay cut if it meant that women would be awarded the same paychecks as males.

Previously the Telegraph reported of Andrew being paid £600,000 per annum in salary by BBC back in 2011. His payslip further revealed about him receiving £27,000 in a month and getting an annual salary of about £580,000.

He went to Craigflower Preparatory School in Scotland and also an independent school in Musselburgh, East Lothian. He then attended Trinity Hall, Cambridge and completed his graduation with the first class honors degree.

Andrew belongs to a religious family; his father, Donald Marr was an investment trust manager and his mother, Valerie Marr a sit at home housewife.