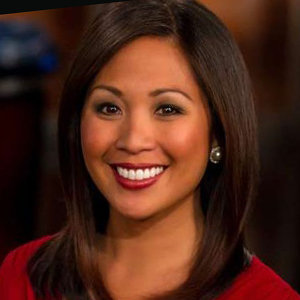 In the early morning when the sweet sound of birds chirp relaxes the atmosphere, WCVB anchor Antoinette Antonio reaches towards the studio and broadcast the NewsCenter 5 EyeOpener at 4:30 AM. The hard-working and passionate TV anchor then fulfils the responsibilities of her noon shift each weekday covering the hot stories.

She has also worked for KOB-TV in Albuquerque, New Mexico and KWES in Midland/Odessa, Texas.

WCVB anchor Antoinette Antonio is a married lady. Her husband, Jeremy Fine, who likes to eat Candy corn, is a video producer and photographer. The couple conducted their wedding in New York on 1 September 2012, and since then they are relishing their ride.

During their first anniversary in September 2013, Jeremy wrote a book titled J+A Fine One Year Married Life, where he indited their married life story and gifted the book to his TV anchor wife. In his retrospective book, the photographer described the first year moments from their wedding day to honeymoon and their settlement in the city of Boston.

Antoinette and her husband Jeremy are the proud parents of their two kids. Antoinette Antonio and her husband, Jeremy Fine with their two kids enjoy their summer vacation in August 2018 (Photo: Facebook)

Back on 26 November 2015 during Thanksgiving, the California native hinted she was pregnant with her first bundle of joy and flaunted her baby bump. In February 2016, the couple welcomed a baby boy named Greyson Gregory.

Weston Joseph joined his older brother Greyson on 3 June 2018. He weighed 5 pounds and 11 ounces during his birth. Both their children have made their debut in WCVB on-air debut, and Antoinette is proud of the fact that her second child Wetson made WCVB on-air debut the day he was born.

The team of WCVB announced in June 2013 that Antoinette joined News Center 5’s weekend EyeOpener as a co-anchor. According to Payscale, an employee on WCVB earns an average salary of $72 thousand. She is likely earning some fruitful amount of fortunes while co-anchoring the Newscasts that airs from 4.30 AM to 7 AM in Boston.

Before WCVB, the California native worked as weekday morning and noon anchor at KOB-TV in Albuquerque, New Mexico. In the TV station KOB, she joined in 2005 and covered several stories like hot air balloon crash, floods, and snowstorms. She has also worked in Midland/Odessa, Texas in the TV station KWES.

Antoinette Antonio, who was born in California, celebrates her birthday on 7 December. She has concealed her birth year, and her age is unknown. During the 1980s, her parents migrated to the United States of America. In her family, Antoinette has a sister whom she often shares on social media.

Antoinette received her education from the University of California where she graduated with a degree in English and International studies. As per wiki, the TV anchor has won several team awards from the Associated Press in Texas, and the New Mexico Broadcasters Association.