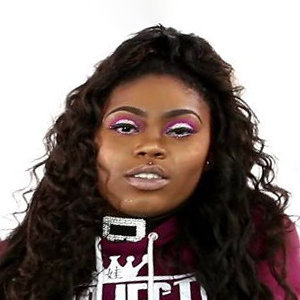 Finding balance among work and family is a bit troublesome. Lucky is the rapper Asian Doll, who is managing both of them side by side. Things have become possible because of her supportive rapper mom. Though she had an obstacle in accomplishing a dream at the beginning, she now has succeeded in meriting a position in the rap/Hip-Hop genre.

Asian Doll is a professional rapper artist prominently known for her 2016th mixtape Drippin In Glo. The lady also is recognized for her EP, Rise of Barbie Doll Gang.

Asian Doll's Net Worth And Career

Asian Doll, age 22, has accumulated the net worth of $50,000 from her career as a rapper. She has been earning the income from the Gucci Mane's 1017 Records. In 2017, she was signed by the record company and became the first female rapper artist signed to the label.

Dallas-native left her study and dropped out of high school to start a career in singing. At the tender age of 18, Asian released her single EP, Rise of Barbie Doll Gang.

Also in 2016, she released the mixtape Drippin In Glo. The same year in September, she released another album named Project Princess Vol. 1. In the year 2018, Asian appeared as a featured artist in two albums, 15 and     YBN: The Mixtape.

Asian Doll on her music video First Off released on Oct 25, 2018 (Photo: YouTube)

On 25 October 2018, she released a music video First Off, which has over 745K views. Asian has over 91K subscribers on her official YouTube channel.

Asian Doll was raised as the second oldest of four siblings in the family. Her single mom raised her after her father was sentenced for a jail. At the age of 12 in 2009, she started residing with her grandmother for two years after her mother was convicted to prison in case of fighting with Asian's aunt.

As reported by the Famous People magazine, Asian's family members, especially her father, were against her career and was not supportive of her choice to become a rapper. Her dad even wanted her to be focused on her studies.

Luckily, her momma, who is a former rapper, inspired her to commence a rapping career. She even feels grateful for her mother. While speaking with xxlmag.com, she gushed the reason to start a rap career. She confirmed that it was her mom who inspired her to bring a resolution in Hip Hop. She said;

“I used to be like, Yo, I don’t even know how I know how to rap. It’s nothing I forced. I really know how to do it so well and so fast. Like, how did I get that talent? It was my mom."

Besides her mom, PnB Rock is one of her inspiration and often showed her gratitude toward him on her social media post. While speaking with The Source Magazine, Asian even told that she loves him till death.

Asian Doll was born with a real name Misharron Jamesha Allen on December 7, 1996, in the United States. Later her parents raised her in Los Angels, the USA. To pursue a career in singing, she dropped out of high school.

Asian holds American nationality and belongs to mixed ethnicity (black descent). Standing at the decent height, the 22-years-old lady, Asian has a long curly hairstyle. However, she loves to blend her hair with different hairstyles. She often is seen changing her hairstyles in events and ceremonies. Likewise, Asian also is a makeup artist and often uploads videos on Makeup Tutorial.