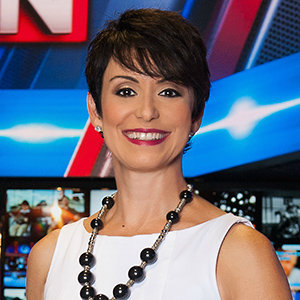 The Five-time Emmy award holder, Belkys Nerey is a renowned anchor and host but is also no stranger to music and ballet dance. Her sharp and clear possession to interact and entice the audiences propels the TV personality to garnish fame and reputation.

Stepping into journalism as a reporter for a South Florida cable station, Belkys has been serving as a main anchor and host of her cooking show WSVN. She is also the former co-anchor of Miami Fox affiliate.

Belkys Nerey has been in a relationship with her sweetheart, Demetri S. Mouratis, Senior Vice President of Northern Trust Corporation, for over a half-decade.

Belkys and her fiance have been together for over five years and are relishing an intimate love affair with each other. However, she took time to reveal her love affair with Demetri and on 3 June 2016, she shared a picture of her partner for the first time much to the delight of her massive followers. Since then, the duo has been the star of the social media with their picture-perfect relationship.

Belkys looks to add new chapters to her life in 2018. The start of her chapter has begun as a fiancée after announcing her engagement on 24 May 2018. She has been flaunting her diamond engagement even since Demetri got down on one knee. Belkys' engagement with her partner has built the strength of their kinship. They even went to watch the movie to celebrate their five years of their togetherness.

Belkys Is A Married Woman!

Congratulations to Belkys and Demetri. The couple has exchanged their wedding vows and is now labeled husband and wife. Surrounded by close friends and family members, the pair tied the knot at The Bass Museum in Miami Beach.

Their close friend Mario Vergel officiated the wedding. It was a long-awaited event considering the fact that they've been a couple for a long time. This is Belkys first and hopefully last marriage while Demetri is in his second run of married life. Maybe this time Demetri will settle down for good. Belkys and Demitri on their wedding day. (Photo: sun-sentinel.com)

Having first met each other while sitting next together in a flight in 2013, their romance evolved with time and grew stronger with every passing day. Their respective social media accounts show the pair's love for one another as they seem seemingly inseparable from one another.

Florida-native Belkys Nerey, 52, has been working for the WSVN Channel 7 as the TV news anchor as well as TV Cooking Show Host since November 1994. According to the PayScale, an estimated salary of the Florida-based news anchor ranges between $12,389 - $151,521. Having two-decade experience in news anchoring, Belkys is likely entitled to an above-average salary at WSVN.

Born in Havana, Belkys Nerey celebrates her birthday every year on 19 July. She currently ages 52 but defies her age with a sleek look and personality.

Talking about her family, she was raised by her parents, father, age 83, and mother, Cary. Her love for her family member is visible in her social media post. On her father's 80th birthday on 6 February 2015, she wished him uploading a photo of her carrying a giant cake alongside her dad. Similarly, her mother had a total knee replacement surgery on 17 November 2015.

Belkys, who has short height than her fiancé Demetri, enrolled at Florida International University. Later, she completed her education with a Bachelor's degree with Broadcast Journalism, as per the wiki.