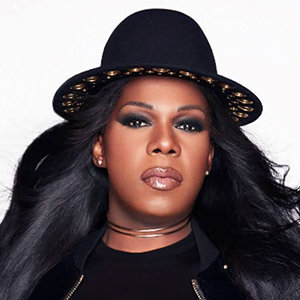 The starlet of the show Big Freedia: Queen of Bounce, Big Freedia was only 13 when she came out with her sexuality to her mom and expressed her queerness. Her baby momma, who initially didn't understand, later supported her in the best way as she could.

The New Orleans native emerged herself in the music industry and soon rose in the queer music scene becoming a local celebrity. She is an American musician best known for the albums like A Very Big Freedia Christmazz, Just Be Free, and 3rd Ward Bounce.

Big Freedia is openly gay and has been rejoicing a romantic love life with her boyfriend, Devon. She first realized her sexuality at the age of 12 or 13.

After the Hurricane Katrina hit the New Orleans in 2005, openly gay rapper Big Freedia evacuated to Houston with her family and lived for two years. There, the rapper met the man of her dream, her boyfriend, Devon through their mutual friend. The couple's lovey-dovey relationship evolved in no-time and started dating in 2006.

During her March 2015 interview with the Huffington Post, the Make It Jingle singer affirmed that both of her families approved their relationship.

Moreover, the lady revealed that she was wearing an engagement ring and is planning for a marriage with Devon. She also shared that when her soon-to-be husband Devon went to jail after her first show Big Freedia: Queen of Bounce, she underwent the most shocking experience of her life.

Though Freedia told that the marriage was in their cards, during her big day, she ran from the wedding chapel. In September 2017 during the episode of 'Freedia Leaves Devon At The Altar | Big Freedia Bounces Back,' she explained why did she leave her soon-to-be-husband Devon alone in the altar. The runaway bride told that she had legal issues. Also, she wanted to develop her career. Thus, she didn't attend the wedding.

But, when Devon popped the question in an episode uttering if she still wanted to marry him, Freedia unhesitantly accepted his proposal. She then affirmed to her fiancé that she would not leave him alone in their future wedding and it would be 'bigger and better' than ordinary nuptials.

Afterward, on 22 December 2018, Big Freedia was seen praying her partner for the loss of his grandmother, Katherine. In the caption, she mentioned him as her 'hubby.'

How Much Is Big Freedia's Net Worth?

Big Freedia, age 41, garners the net worth from her career as an American rapper. In August 2015, the court imposed a three-year probation sentence to her in charge of stealing government funds.

The documents showed that the musician applied for Section 9 benefits listing her monthly income between $100 and $1,000 in March 2009.

She got accepted in the program and received rent fees of $521 per month. However, between 2010 to 2014, documents reflected her filings where she defrauded $35,000 worth of housing vouchers from the Department of Housing and Urban Development. The judges found her guilty, and she faced a maximum of $250,000 fine and a sentence of 10 years in prison.

Born as Freddie Ross on 28 January 1978, Big Freedia is a native of New Orleans, Los Angeles. She was male by birth, but later, she transformed her gender into a female.

Freedia was raised by her parents, a mom named Vera Ross, who passed away in April 2014. In her family, she is a sister of two siblings, a brother named Adam and a sister named Crystal. Her brother Adam was killed in late January 2018 in New Orleans shooting. Following her brother's death, Freedia canceled her shows that she called "a senseless act of violence."

Freedia stands at a casual height and holds American nationality. During her childhood, she sang in the choir and took piano lessons. In 2011, she got nominated for GLAAD Media Award.