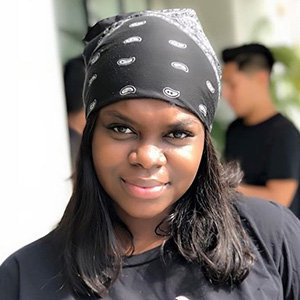 Sometimes the love and care for a child are so infectious for the parents that they are compelled to re-work on their fallen relationship. Similarly, Cori Broadus' parents had to work on the roadblocks of their marriage after knowing the illness of their daughter.

American teen singer, Cori Broadus is known to be the daughter of Calvin Cordozar Broadus Jr., who is famous by his stage name Snoop Dogg and Shante Broadus.

Cori is the youngest child of rapper, Snoop Dogg, and entrepreneur, Shante Broadus. She has two brothers named Corde and Cordell, who are five and two years older than her. Talking about her illness, she was six years of age when she was diagnosed with Lupus.

Her parents noticed a light spot on her face, and she started to lose her hair and weight drastically at the same time. But for now, Cori has been given adequate medication and all thanks to her parents who rekindled their differences to be with their daughter.

Snoop has reportedly credited Cori’s inconsistent health as a reason behind their reunion to save their troubled marriage. Snoop has always been termed as an unfaithful husband, and Cori's mother also played a vital part to rekindle their relationship.

The couple got married on 12 June 1997 and re-exchanged their wedding vows again on 12 January 2008, primarily for Cori's ailment.

What Is Cori Broadus's Net Worth?

The 19-year-old singer accumulates her increasing net worth following her father’s footstep in the music industry. She added a significant portion of her receipts with her hit single, Do My Thang, which was released back in 2011. She also elevated her earnings when she featured in her dad's 2013 hit, No Guns Allowed.

Similarly, she increased her paycheck starting her own YouTube channel, Cori B on 8 August 2011. It’s been more than four years that she has not posted any of her songs on this channel.

Parents About Cori Having Boyfriend, Dating Since Class Eight!

Cori’s parents are protective of their daughter when it comes to dating. In an interview for Ellen DeGeneres Show in 2015, both Cori and Snoop were in a jovial mood to talk about her dating life. On the show, the teen singer also stated that her father told her to get a boyfriend only when she turns 77 years of age.

Interestingly, the singer is dating a guy named Ez who has an Instagram account with a username, doitezmbk. The couple were a school sweethearts and are together since they were studying in grade eight.

Cori recently posted a photo with her boyfriend addressing their followers about their new YouTube video titled OUR FIRST Q&A | Cori & EZ on her IG account in July 2018. The couple created a YouTube channel named Cori and Ez on 6 July 2018.

Previously, she shared a birthday post for her boyfriend on her social networking site on 21 February 2018. They were also seen sharing a lip kiss in the Twitter image posted by Cori on 12 February 2017.

Cori Broadus celebrates her birthday on 22 June. She is 19 years of age, born in the year 1999 in California, as per wiki. The pop singer stands way shorter than her father whose height is 1.93 (6’ 4”). Well, she belongs to an Afro-American ethnicity.

She completed her high school graduation attending Ramon C. Cortines School of Visual and Performing Arts in 2017. Her father also shared multiples pictures of her from her graduation day on his IG account on 9 June 2017.