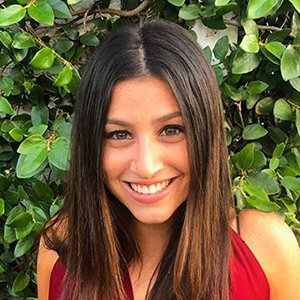 Dana Gaier is a singer, songwriter, and actress who is well known for her voice credit for young Edith in the Despicable franchise. It was almost like Dana was meant for the role- she had failed to attend the first time as she was on her 6th grade camping trip. But, the offer still stood as the casting people had not yet found the perfect voice. Dana auditioned for the role, and the project immediately found out what they had been looking for the project.

Dana also launched GyourB.org, a website for teenagers to share their experience with bullying, where they try to motivate and uplift each other

American actress Dana has been in a relationship with Adam Ellis. There isn't much information to go on about them like when the love birds started dating or how the romance's root sprouted. But it is speculated that the pair met at UCLA, where their love-life flourished.

They started featuring each other in their respective social platforms since December 2018. So, it is reviewed that the pair began dating somewhere in between late 2018. Dana spending holidays with her boyfriend, Adam in April of 2019 (Photo: Dana's Instagram)

The couple was seen enjoying each other's company and having a blast from ice-skating during Valentine's day 2019. There is no doubt that the pair's love and affection have run deep within a short period.

Don't Get Left Behind: Sophie Nelisse Age, Boyfriend, Net Worth

Their closeness and bonding can be witnessed in the romantic posts they make about each other. The Despicable franchise's princess might have already landed on the knight of her life in the silver linings. Her boyfriend recently celebrated his 23rd birthday on 10 June 2019.

Dana's previous dating life and relationships are still under review. However, she has never been reported as getting engaged or married yet.

Movies And Net Worth

Dana flourished her career in the industry, gaining massive success and stardom from the Despicable franchise. She has also been part of films like On My Block, Do You Want to See a Dead Body?, The Ice Cream Truck, Training Wheels, 30 Rock, and Ernesto’s Manifesto.

As a singer, she has also been part of several theater productions. She has featured on Studio 54 stage, UCLA production, and also has been casted in award-winning play In The Powerhouse.

Dana’s career in the film industry has attracted immense fame and relative riches in her life. But, as of now, her net worth is yet to be disclosed to the general public.

Dana was born on 30 August 1997 in New Jersey, USA. She attended the UCLA double majoring in communications, sociology, and a minor in film. Dana was 11 years old when she got her first movie. She landed the role of the middle sister Edith in the Despicable series.

Besides the fame light in the entertainment industry, she likes to enjoy her free time participating in yoga, watching movies, enjoying the outdoors, and hiking.

The Texas-born likes to leak information on her family life to a minimum. Only a few aspects of her family background are known to the public. Nonetheless, she has an older sister in the family, Jillian Gaier. Her sister is a production assistant at CNN Tonight.

On the aspects of physical attributes, Dana has a height of 1.55 m (5 feet 1 inch) with a modest build and weight.