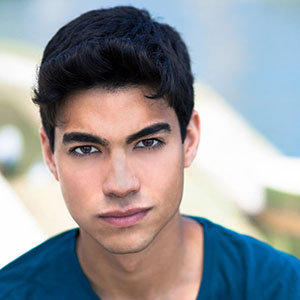 While there is still a long way to go before we see more Latino faces in mainstream Hollywood, Davi Santos has already managed to pave a path for himself.

If you are a power ranger fan and have watched Power Ranger Dino Charge, you may remember him as Sir Ivan, The Gold Power Ranger.

But Davi is so much more than just an actor; the movie, The Cure, which he wrote and acted on was premiered at Cannes Film Festival.

Is Davi Santos Gay OR Is In Relationship With Girlfriend?

Even though Davi hasn't publically addressed anything about his sexuality, the rumor of him being gay arose after he starred in the gay romance movie Something Like Summer based on the famous novel of the same title. Davi Santos in the movie something like summer (Photo: IMDb)

We might not know about his sexual preference but him attending Gay Men's Chorus Of Los Angeles 2nd Annual Voice Awards on May 19, 2013, and him appearing onscreen romancing the same-sex actor facts that the actor is a supporter of LGBT community.

You May Like: Wilmer Valderrama Wife, Gay, Ethnicity, Net Worth

Being in a limelight and keeping your relationship under the radar is a tough job but Davi has managed to keep his love life low key. Hence, we do not know who this Brazilian hunk is dating. But as they say, no news is good news- him not officially announcing his relationship means that he is single and on the market.

Santos Net Worth And Career

Even though the exact net worth of Davi is unknown, by looking at the roles Davi has bagged over the years, he must have acquired a hefty amount of money through his career in movies and TV shows.

A self-tape audition led Davi to land the role of ABC comedy series Don't Trust the B---- in Apartment 23 (2013). After that, he joined the cast of the American Sitcom Mr. Box Office for two seasons. Davi continued making television appearances on various TV shows like How to Rock, Switched at Birth, Mystery Girls and Chasing Life.

In 2014, Davi Santos was cast as the Gold Ranger on TV show Power Rangers Dino Charge for two seasons. Santos went on to work in Something Like Summer, which is a movie based on the novel of the same title in 2017.

In July 2018, Davi was cast as Gabe in the CBS All Access fantasy drama series Tell Me a Story, which premiered in October. We are certain that this is just the start of his career, we will see more of Davi Santos in the coming years.

Davi was born in Rio de Janeiro on 1st February 1990 but later moved to New York City with his parents.

Although the actor is miles away when it comes to divulging his love life, he is very active in flaunting his bond with his parents on social media.

The 28-year-old actor holds a 2nd dan black belt in Shotokan Karate. Santos stands tall at the height of 6 feet. His sun sign is Aquarius.