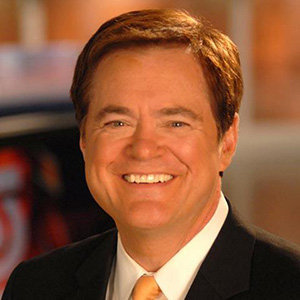 The co-anchor of NewsCenter 5, Ed Harding must be the man of fate as he acquired the love of his college life and in the meantime, he made his journey to the pinnacle of journalism.

Ed Harding is an American Journalist and is renowned for his work in WCVB-TV. Ed has been a role model for millions of youth including his own son, who has been working as a journalist in WCVB's sister station WMUR-TV.

Life of Ed Harding is filled with the joyous moment with his wife, Andrea Halpern Harding.

Ed and animal hospital administrator Andrea dated for several months before getting engaged in April 1976. Five months later, they shared the wedding vows on 30 October 1976.

You Should Not Miss This: Natasha Raskin Wiki, Bio, Married, Husband, Divorce, Boyfriend They not only cherish their relationship of 42 years but have been embracing the love of two children named Caitlin and Adam. And, it is understandable that his children see him as a role model. So following the footsteps of his father, Adam has become a journalist in Atlanta. Adam has started working for the sister station to his father’s WCVB-Boston station, WMUR-TV in New Hampshire. Meanwhile, his daughter Caitlin carries her father's learning on the heart and pursues a career as a teacher in Needham.

As of now, the duo relishes their happy life together in the Greater Boston area along with his family. The couple has also proved that being in a long relationship is not hard as long as you are devoted to each other's life.

Know About Ed Harding's Net Worth And Salary

Ed Harding is an award-winning local journalist of Boston, who garners his net worth from his professional career of journalism. He is a co-anchor of NewsCenter 5 at 4:00, 6:00, 7:00 and 11:00 PM and has been in the channel for more than two and a half decade.

Ed Harding had served as sports director and anchor for WDSU-TV in New Orleans from 1978 to 1981. He had also anchored for KMSP-TV and WPTZ-TV in Plattsburgh, New York.

After that, he joined WISH-TV as sports director and principal sports anchor serving in the 6 PM and 11 PM sportscasts. He then co-produced and reported the station’s annual 'Indy 500' individual, and worked as the host of The Colts Today.

Then in 1988, Ed Harding made his way to WCVB as weekend sports anchor and reporter. He has co-anchored the EyeOpener newscast and also helped to launch WCVB's NewsCenter 5 at 4:30 PM and 7 PM in 2016.

As per PayScale, the base salary of the WCVB reporter is $72K per year. Thus, concerning his career in the News Channel, he has bagged stupendous amount of fortunes.

Do Not Miss: Monica Crowley Wiki, Married, Husband, Boyfriend, Salary and Net Worth

Born as Edward Charles Harding in 1954, in the United States, Ed Harding celebrates his birthday on 11th December. He stands the height of 1.65 meters (5 feet and 5 inches tall). He pursued his education from Emerson College (1971-1973) located in Boston, Massachusetts.

He was born in a well-established family, where his father, Robert J. Harding was the vice president and partner of Alpha Associates of Minneapolis, a management consultant, in its branch in Newton, Massachusetts.