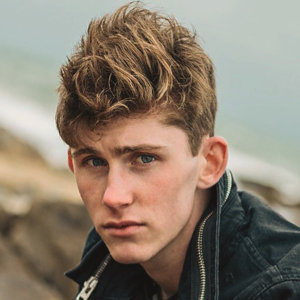 Young Irish actor Fionn O'Shea rose to fame from Netflix's Handsome Devil and Innocent. He is one of the four Irish actors who made onto Screen International’s 'Stars of Tomorrow' and 'Future Talent' list in 2017.

Fionn has credited in several movies and TV shows including New Boy;  Jack Taylor;  The Siege of Jadotville; Handsome Devil; Innocent; and the upcoming flick The Aftermath. The actor also has an interest in Skateboarding and wanted to be a professional skateboarder during his young age.

Played In LGBTQ Drama 'Handsome Devil'; Is He Gay Or Has Girlfriend?

In LGBTQ drama Handsome Devil, Irish actor Fionn O'Shea, age 21, portrayed the role of Ned Roche alongside his on-screen partner Conor Masters, played by Nicholas Galitzine. In the drama, Ned was forced to share a room with Conor.

Ned was a sensitive loner in Dublin school whereas his partner Conor was an exact opposite of him. They establish a friendship with the help of English teacher Mr. Sherry, portrayed by Andrew Scott. Though the movie covered the honest story about friendship and male friendship, Ned's sexuality was ambiguous. During Fionn's June 2017 interview with Cinephiled, he talked a bit about his on-screen character as Ned and the issue about LGBT in the movie. Unlike the past days where agents and managers discouraged the actors from playing gay roles, the Irishman thinks that times have changed now. He admits that today, one can accept their sexuality as a part of their identity.

Fionn also talked about the passage of the marriage equality vote in Ireland and said that it was an inspiration for most of the peoples. The equity favored the Irish kids in school who were struggling to come out with their gay identities openly. He also admitted that it is still difficult for LGBTQ kids who face all those fierce behavior due to their queer sexuality.

Though Fionn is an LGBTQ supporter, behind the camera, his sexuality has remained ambiguous as like his on-screen character Ned. Currently, he is reportedly not dating anyone and has remained focused on his acting career. He has shared a few details relating to his personal life that has secluded the information about his possible girlfriend.

Fionn O'Shea, who has low-keyed his birthday, was born in 1997 in Ireland. As a child, Fionn was obsessed with skateboarding and wanted to become a professional skateboarder.

He describes his father as a 'cool person.' Growing up in Ireland with his parents, his interest in acting arose. Fionn started acting at the age of 11.

Standing at the height is 5 feet 7 inches, he carries mixed ethnicity. Fionn's dream role is to become a villain and is interested in playing piano and football. He graduated from high school in May 2014. As per wiki, Fionn describes his Handsome Devil character, Ned as his inspiration. His nationality is Irish.