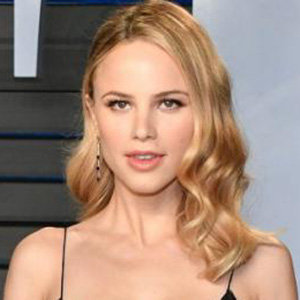 American actress Halston Sage reinforced in the entertainment industry through her roles in How to Rock, The Orville, and Paper Towns. Her on-screen kiss with Rose Byrne in 2014 comedy film Neighbours set her to become a nominee of MTV Movie Award.

She is also known for her works in Scouts Guide to the Zombie Apocalypse, Crisis, and You get Me.

Helton Sage, age 25, was romantically linked to American singer-songwriter Charlie Puth. The duo fueled the dating rumors in September 2018 when Halston flaunted a photo of her enjoying PDA moments with Charlie. They looked cozy sitting in a pool where Helton wrapped her then-boyfriend Charlie around her arms. She captioned, '9.22.18.' They were also seen at a resturant in early September 2018 where Halston relaxed in the lap of Charlie. The twosome enjoyed their resturant date after having attended the 2018 New York Fashion Week separately.

Currently, she and Charlie are no more in the relationship. Her singer ex-boyfriend is dating Charlotte Lawrence. They were first spotted in December 2018 at a West Hollywood club. Meanwhile, Halston reportedly is enjoying her singlehood.

Before Charlie, the Scouts Guide to the Zombie Apocalypse actress dated Seth MacFarlane. The ex-couple, who got linked in September 2017, were spotted going out for dinner at Sushi Park in West Hollywood in February 2018. The gorgeous actress co-starred alongside her ex-boyfriend Seth in 2017 American comedy series The Orville.

She was also linked with American actor, Chord Overstreet in 2014 and dated Big Time Rush actor James Maslow from January 2011 to December 2013.

Know About Halston Sage Net Worth

Halston is an American actress who savors the net worth of $3 million. She appeared in 2015 film Goosebumps that grossed a box office of $150.2 million in a production budget of $84 million, as per Box Office Mojo.

Her debut in the entertainment industry came in 2011 where she appeared as Sadie in American sitcom Victorious. In 2017, the actress landed the role of Alara Kitan in The Orville. Halston is now set to appear in the 2019 film The Last Summer alongside KJ Apa, Maia Mitchell, and Tyler Posey.

Born as Halston Jean Schrage on 10 May 1993, Halston is a native of Los Angeles, California. Her parents are Lenny and Tema Schrage. In her family, Halston has two siblings, Max and Kate, who are younger than her. Halston's sister Kate is six years younger than her. Her paternal grandmother has roots towards Cuba.

Halston has a height of 1.66 m (5 feet 5¼ inches), and she is of Ashkenazi Jewish heritage. Her weight is around 53 kg (117 pounds), and her body measurement is 35-24-34 inches. As per wiki, the actress dreamt of becoming a dentist during her childhood.