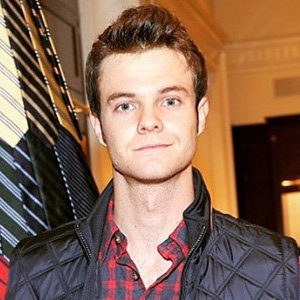 Imagine an impact a five-year-old would have after the divorce of his parents. But for Jack Quaid, love from his celebrity parents didn't drop by an inch and develop an atmosphere, where he respected both Meg Ryan and Dennis Quaid.

And now, he has followed the footsteps of his parents to become a renowned actor. Jack is known for his role as Marvel in The Hunger Games. He has also portrayed the pivotal character of Connor in Rampage (2018).

Jack Dating Actress; Is He Gay?

Jack Quaid is now in a blissful relationship with his girlfriend.

Jack is dating Middle School Talent Show actress Lizzy McGroder and has been flaunting their picture-perfect chemistry in their social media account. They have been relishing a romantic relationship for more than two years. Not just on social media but the duo has made their red carpet debut as well. In February 2017, he and his girlfriend walked together in the red carpet of 25th Annual Elton John AIDS Foundation's Academy Awards in West Hollywood, California. Out of many pictures they post together, Lizzy often mentions him as her man and has even shared the snap from the awards functions.

He does not just love to spend time with Lizzy but also claims that he is lucky to spend his life with her. And he makes sure her birthday on 2nd April every year is a big event. The couple has only spent two years together with many more to come and for Lizzy, the year 2018 with her boyfriend was one to remember. She has shared a picture with Jack and called him her love and best friend forever.

You May Like: Amanda Stanton Wiki: Ex-Husband, Net Worth- Other Interesting Facts

As of now, the heartthrob couple maintains a warm relationship with each other, but he is yet to confirm Lizzy as his wife-to-be. Although he is not married, his blooming affair with Lizzy hints that he is not gay.

Prior to Lizzy, he was once rumoured to be dating actress Leven Rambin, who played Lily Montgomery in All My Children alongside Colin Egglesfield, Trent Garrett, William deVry, and Jonathan Bennett.

Jack Quaid's Net Worth From Movies And TV Shows

Jack Quaid gathers the net worth from his professional career as an actor. Having spent his childhood witnessing the stardom of his parents, he followed the footsteps of his parents to the entertainment industry.

Jack stepped into the acting career at the age of 20, when he portrayed the role of Marvel in the movie The Hunger Games. Since then, he has garnered both fame and wealth. He also has a cameo role in The Hunger Games: Catching Fire (2014) as Marvel. The movie had the box office collection of $865 million from the production cost of $130–140 million.

On the other hand, Jack earned the income from the TV shows including, Mrs, Vinyl, and Workaholics. In the TV series Vinyl, he played the lead role of Clark Morelle alongside his cast members Christian Navarro and Michaela Coel. According to the Payscale, an estimated salary of the actor is $50,529 per year.

Born in Los Angeles, California on 24 April 1992, USA, Jack Quaid stands at the height of 6 feet and 1 inch (1.85 meters). His real name is Jack Henry Quaid. He went to NYU's Tisch School of the Arts and studied there for three years.

His parents Meg Ryan and Dennis Quaid raised him. But when Jack was five years old, his parents got separated. He says that it was difficult for him to witness the tragedy of his parents but at the same time, they were still his dad and mom. He further adds that he enjoyed the work of both his parents.