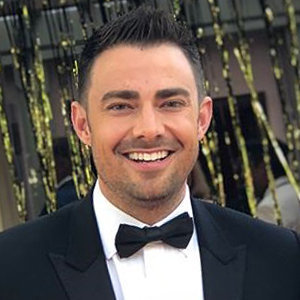 Jonathan Bennett, whose struggle in life, built empathy to follow the path of a dream. He was a college drop-out and accompanied acting in hope to possess a big break in his life.

Starting a job as a bellboy in New York, Jonathan's stubborn work pay off in no time. Currently, he is the host of the Food Network series Halloween Wars.

The Dancing with the Stars personality came out as a gay in October 2017. Before his revelation, one of the judges from the Dancing with the Stars, Julianne Hough outed him as a gay. In an interview with Extra host, Mario Lopez, she told that she and Jonathan could have a date, but she poked fun saying the affair wouldn’t work as he was a gay.

In November 2017, Jonathan exclusively confirmed about his dating affair with his boyfriend, Celebrity Page host Jaymes Vaughan. The pair, who never hesitate to flaunt their romantic bonding, added flavor to their relationship after he uploaded a cozy shot of together in an Instagram on Halloween with a caption “I Love You, babe.” The two partners, who wore suits, seemed to be blessed with their relationship. On the recent Halloween 2018, he and his beau, who wore a white shirt and black suit with a black bow tie, celebrated the Halloween Night party together.

Jonathan Bennett’s Net Worth From Hollywood

Jonathan Bennett, 37, accumulated the net worth of $300 Thousand from his acting skill. His interest in acting arose during his college. So, he left his education and moved to New York to pursue his career in acting. Fortunately, he got the role of J.R. Chandler on the ABC soap opera All My Children in 2001. He appeared in the series for a year.

After then, he earned the fruitful amount of revenue appearing in the television series, including Law & Order: Special Victims Unit, Smallville, and Veronica Mars. In 2014, All My Children actor announced to compete in the 19th season of Dancing with the Stars pairing with professional dancer  Allison Holker. One of the reasons to appear in the reality dancing show was his late parents’ interest toward the show. Alongside acting, Jonathan was the host of the Food Network called Cake Wars in 2016.

As of 2018, he has portrayed the role of William in the movie The Dawn. Also, he is working for the upcoming film The Haunting of Sharon Tate and Day Six which is in post-production. Before an acting career, He was working as the bellboy at the Mercer Hotel in New York.

Born on 10 June 1981, Rossford, Ohio, USA, Jonathan Bennett stands at the tall height of 6' 2" (1.88 meters). He was raised by David Bennett, a Toledo physician, and Ruthanne Bennett (née Mason) alongside his siblings Brent, Brian, and Lisa Bennett.

Unfortunately, his parents are no longer with him. He lost her mother on 30 November 2012 when she was at the age of 67. Then in April 2014, he then suffered the loss of his father, aged 73.

Apart from that, Jonathan is a close friend of Kathy Griffin, who is a girlfriend of Randy Bick.