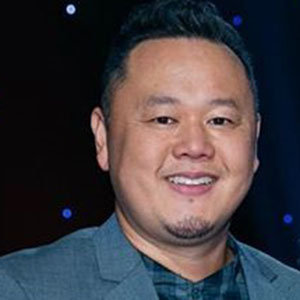 In the suburb of LA's landmark, 'Bangkok Market' American chef Jet Tila's parents stocked the fresh Asian products imported from Si Racha, Thailand. It did not take time for Jet to become a professional chef as he grew up in the de facto community center surrounded by the diversity of foods.

The professional chef has made his appearances on several Food Network programs such as The Best Thing I Ever Ate, Chopped, Cutthroat Kitchen, and Iron Chef America. He has a shaved-ice restaurant called 'Kuma Snow Cream' in Los Vegas.

Jet Tila was a teacher at Sur La Table when he met his future wife, Allison Tila. She attended his class, but it took a year for the couple to fell in love after their rendezvous in Vegas. His wife Ali is the managing partner at Team Tila in Greater Los Angeles Area and often helps Jet with her pastry cooking and recipes testing skills.

The duo tied their knot in May 2011 in front of several guests like Kathie Green McKee, Scott Okazaki, and Mary Tila. In the ceremony, Jet donned a navy black coat whereas his wife Ali carried a white-purple bouquet of roses with her extravagant wedding attire. Jet Tila and his wife Allison Tila had their wedding in May 2011(Photo: Facebook)

The couple has two kids to relish; their daughter Amaya Tila and a son named Renny Tila. During Amaya's birthday on 17 November 2017, she received a special Spudnuts Donaught treat. She also made her TV debut on Home & Family in January 2018. Likewise, the couple's son Renny exulted his birthday moment on 16 June 2018.

How Did Jet Tila Gather Net Worth?

He has made contributions to the National Public Radio culinary program Good Food. Jet together with Evan Kleiman opened a shaved-ice restaurant 'Kuma Snow Cream' in Los Vegas.

American chef Jet was born to his parents Pramorte Tila and Marasri Tilakamonkul. His Hainanese Chinese origin parents immigrated to the United States during the 1960s and settled at the city's Thai Town. In China, Jet's paternal grandmother had a Thai Chinese coffee shop where lots of Hainanese people enjoyed the slurp of coffee.

During the late 70's, his parents along with the Thai Association started the first Thai temple in Los Angeles. His father Pramorte opened Bangkok Market in 1972 and imported the goods from the homeland. After Jet's birth, his family opened the first Royal Thai restaurant and later had six branches. In his family, the chef has a younger brother who is a businessman.

Jet Tila was born on 6 February 1965 in Los Angeles, California as Jet Tilakamonkul. The American chef who is an expert in Thai and Chinese cuisine stands at the height of 5 feet 7 inches (1.7m). At the age of 48, Jet partnered with the Compass Group and launched the fast-casual Pan-Asian concept from Modern Asian Kitchen.

He grew up in Los Angeles' Thai Town neighborhood and has a birth sign as Aquarius. Jet belongs to Hainanese Chinese ethnicity and holds American nationality. As per wiki, he took his culinary training course in Le Cordon Bleu and California Sushi Academy.