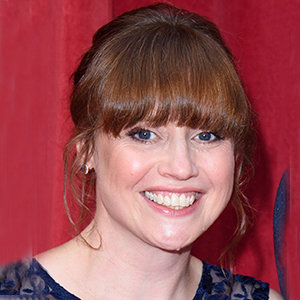 Karen Blick is known for her role double role as Lydia Hart and a nurse in the ITV's soap opera, Emmerdale. Also, Karen has appeared in No Angels (2004), Jumpin the Sharks, World Astonishing News, and Nomads (2015).

A long struggle to get into the entertainment industry had almost taken her passion away from acting. However, without tumbling down, she pursued the acting training and eventually landed a role in Emmerdale.

Karen Blick was born in 1974 in England, and she celebrates her on 25 July. Besides that, there is no information about her early life, parents, and family details.

Speaking about her measurements, the 45-year-old actress stands at the height of 5 feet and 1 inch tall, 1.55 meters.

As of November 2019, the talented English actress, Karen Blick relishes a long term married life with her husband, Simon, who runs a business delivering behavioral health and safety training to companies –since 2011.

The couple first met while working at the children’s outdoor pursuits company PGL in 1996 and started dating. However, they officially got into a close-knit bond after Karen graduated from her acting school.

After dating for over one and a half-decades, Karen and Simon shared their wedding vows in 2011. Karen Blick with her longterm husband, Simon during their marriage (Photo: Karen's Instagram)

In the twenty-three years of a romantic relationship, they got blessed with children, namely Ruby (2010) and Oliver (2014).

Do Not Miss: Is Caitlin Doughty Married Or Still Single? Bio & Parents Details

The 45-year-old actress struggled for over two decades to get in the showbiz, with bit parts and theatre work. Also, she had served as a teacher at Raling Education Authority in London and did a PGCE in 2008; however, she had bigger ambitions in acting.

She got into an acting career after she completed a training course. After the longterm struggles and hardships, Karen's as Lydia Hart in soap opera Emmerdale in 2016 got her into the entertainment industry. In the project, she has a portrayal of double roles, one as an unnamed nurse working at the abortion clinic Viv Hope in 2006 and next as Lydia Hart since September 2016.

As per the plot of soap-opera, Karen's (Lydia) character goes through being the obsessive, overbearing presence in Paddy Kirk’s (Dominic Brunt) life to the caring, a devoted fiancée.