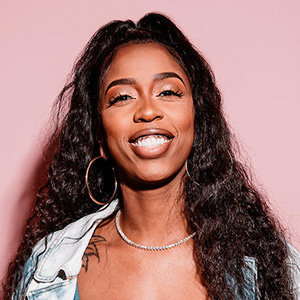 Kash Doll is a famous American rapper and actress whose real name is Arkeisha Knight. Born in a family of six siblings she had a tough childhood. Life became tougher when she lost her father at a very young age and got raised by her mother and stepdad.

Hiding her emotions within herself, Arkeisha never stopped grinding and working hard. Working her way out through many rough and hard times, Kash is an independent woman known for her hustler attitude who never backs down to do any work to show people what she is worth.

What is Kash's Net Worth?

Kash Doll summons her net worth of $600,000 by working as an American rapper and actress.

It is a well-known fact that money is not everything but everything needs money. Understanding this fact well, to fulfill the need and to support herself, Kash started doing the jobs that paid her well, whether be it working as a babysitter or working as a janitor at Ford Field. Similarly, for the sake of earning money, she also worked in Little Caesar's Pizza and Best Buy. It didn't just end there because it also got reported that Kash was paid an enormous sum of money of $26,000 a night to perform an exotic dance in the entertainment industry.

Her transition from  Arkeisha to Kash came in 2014 when she introduced herself as a rapper. Kash gained popularity in this field from her remix of Tinashe's track 2. She also got the privilege to collab with other famous artists like Lil Stl, Icewear Vezzo and even Ca$h Out. It was just the beginning of many more songs to come for Kash as a year later she released her first ever mixtape Keisha vs. Kash Doll.  Her second mixtape named as Trapped in The Dollhouse got released in 2017, and her latest mixtape was Brat Mail which got published earlier this year in 2018.

Besides this, she also has many singles in her bag including her emoji app called KDmoji and is currently enjoying all her name and fame after her hard-fought beginning to her career.

Photo With Drake Leads To Breakup! Who Is Kash Dating Now?

Kash Doll was in a blissful relationship with her boyfriend Shawn until everything fell apart for the couple when her boyfriend got too much insecure. The reason for her boyfriend to get insecure in the relationship was Kash picture with famous rapper Drake in which he was seen hugging her. This lead Shawn to dump her girlfriend Kash as both Shawn and Kash had a different perspective on the controversial picture.

However, Drake was seen mingling with 18-year-old Bella Harris but claims that he is only friends with her. Apart from this Kash also made headlines in the newspapers for the rumor of her dating Meek Mill earlier this year which she cleared up before it took any heights. Similarly, she has been in the news few times in her past for rejecting Niki Minaj and also for the beef with Asian Doll.

Kash Doll was born as Arkeisha Knight on 14 March 1992 in Detroit, Michigan. Belonging to Afro-American ethnicity, Kash, age 26, is a beautiful woman with curly hair, though her real hair is straight which she posted it on facebook.

She holds American nationality and stands tall at around the height of 1.7m (5 feet and 7 inches) which is a little shorter than that of Drake who has the height of 1.82 m.