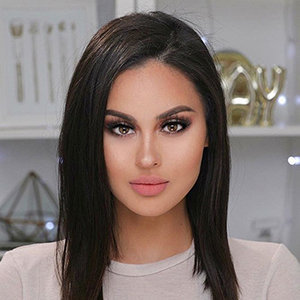 Fashion is not about beauty only, but it's also about the attitude. Christen Dominique is a fashionista, who not only amaze audiences for her beauty, but also as a mother of a son.

YouTube star Christen is a freelance makeup artist. She became famous for her vlogs videos concerning fashion and make-up. She is also recognized as ‘Beauty Guru.’

How Does Christen Dominique Summon The Net Worth?

Christen Dominique summons her net worth as being a freelance makeup artist. She also gathered the revenue from her YouTube channel. As per the Social Blade, she earned the estimated revenue between $1.2K and $19K, which helped her to generate the income between $14.2K and $227.5K yearly.

She began her YouTubing in February 2009. Later in September 2009, she professionally worked as a beauty expert uploading a video titled "How to create fuller lips." On her YouTube channel, she uploaded the video, where her husband, Cesar and her son Jaden does her makeup.

As of now, the makeup artist has over 3.9 millions of subscribers on her YouTube channel and over 1.4 million followers on Instagram. On one of her YouTube videos, she gushed about her plan that she wanted to have a clothing line and fashion brands.

Christen Dominique is married to Cesar Irias and is parents of a son named Jaden Irias. She and Cesar shared wedding vows on 16 June 2012, at the age of 25.

She revealed her son Jaden when she said that she loves to hang out with her husband and son. She mentioned about her son on 12 October 2012 while replying to a Twitter user. In a YouTube video on 29 April 2015, she mentioned that she welcomed her son when she was at the age of 20, so her son was born in the year 2007.

While the Texas-born star loves to enjoy a day with her family, she and her husband celebrated their second anniversary on 16 June 2014. She posted a throwback wedding picture and thanked and felt blessed her husband for being such a caring, supportive and overall amazing husband. On 9 August 2015, she shared a photo of her family on Twitter and mentioned that her family is the love of her life. The love between heartthrob couple has now completed their six years of togetherness. As of now, Christen Dominique is in a blissful relationship with her husband and a son, Jaden.

Born on 5 February 1987, Christen Dominique was born in Texas, the USA. She holds an American nationality and belongs to mixed ethnicity with Guyanese-Portuguese, Mexican, and Arabian descent. She considers herself to be Hispanic as she was raised by her Mexican mother. The 31-year-old Youtuber is shorter in height than her husband Cesar Irias, as per wiki.

On her YouTube video on 29 April 2015, she said that she didn't know much about her father until she was 15. Although she was raised as a single child, she has two half-sisters. One of her half-sisters is of half Indian ethnicity.