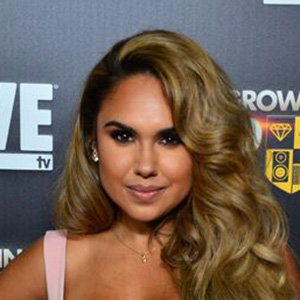 Kristinia DeBarge is an American singer whose first single Goodbye peaked #20 in the music charts of the United States and Canada. She surmounts the world of music with her silver-tongued vocals through the albums like Exposed, Young & Restless, and Thinkin Out Loud.

Like her father James DeBarge, Kristinia pursued her career in music releasing Pop, R&B, and Soul tracks like Fadeout, Sabotage, and Better Way to Say Goodbye.

Kristinia's Family And Cousin; Is She Married Or Has Boyfriend?

Kristina was born to her parents James DeBarge and Christine Mcdonald. Her father James is a legendary American R&B singer of the band The DeBarge Family. In 1985, the group composed a song Rhythm of the Night that peaked #1 on the U.S. Billboard Hot Black Singles.

Before James married the mother of his child, Christine, he had an estranged marital relationship with Janet Jackson from 1984 to 1985. In January 2017, Kristina sought to find out the rumors that her father had a secret daughter with his ex-wife Janet. In her interview, she said that she believes she has a stepsister, and only Janet knows the truth. Describing her dad's estranged relationship with Janet, the musical artist stated that James feels betrayed, sad to get robbed of his alleged daughter.

The Future Love singer is close to her parents and often gushes about them on her social media. During her mother's birthday on 5 September 2018, she showed her love for Christine and wished to have fun on her vacation in Hawaii. She has five cousins named Janae Jordan, Christian DeBarge, Adris DeBarge, Andrew DeBarge, and Bobby DeBarge Jr. During the Christmas in December 2016, she shared a family snapshot and labeled her cousins as gorgeous.

Unlike her family talks, Kristina has somehow hesitated to address her romantic interest. During 2012, she used to mention her boyfriend in her social media, and in one of her tweets in November 2012, she labeled Fabrice Fenty as her beau.

The musical artist also once cited that she and her boyfriend both have the same birth sign as Pisces. Apart from that, she has never mentioned her love life, and as of now, she is reportedly unmarried.

How Much Is Kristinia DeBarge's Net Worth?

Kristinia, age 28, has the net worth of $2 million as an American singer and actress. Since the age of three, the musical artist wanted to become a singer and grew up listening to musical peers like Christina Aguilera, Mariah Carey, and Alicia Keys. Kristina credits Mariah Carey, DeBarge as her inspiration towards music.

She was also a contestant of American Juniors during the summer of 2003. In 2019, Kristina is set to appear in the upcoming movie Conundrum: Secrets Among Friends, where she lands a role of Jasmine.

Kristinia was born as Kristinia Jamie DeBarge in Pasadena, California on 8 March 1990. Standing at the height of 1.61 m (5 feet 3½ inches), Kristina holds American nationality. The singer was at the age of 19 when she signed a contract with Sodapop/Island Def Jam.