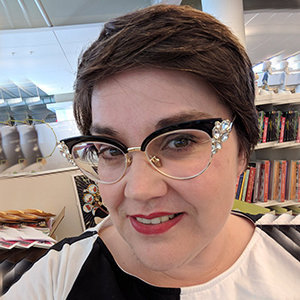 From a Podcast hosting to novel writing, culture critic, blogging, Linda Holmes has graced each platform very alluringly and professionally. Her contributions in these fields are not only remarkable but irreplaceable. The way Linda has carried these works, no one could ever do it this elegantly.

Linda rose to fame with her work with NPR as a blogger and a pop culture critic. She is also renowned as a lead writer of the popular Pop Culture Happy Hour blog. Further, her astounding bio holds an acclaimed record of hosting the podcast of the same name and a presenter of 2019 Audie Awards. Also, she is a former lawyer.

Blogger and author Linda was born on 14 November 1970 in the USA. Sadly, her early life and early educational background remain concealed, but her parents raised her until they moved to Eagan. Her close bonding with her family can be seen in her Twitter post, where she shares her feelings with her beloved parents and her love ones.

Holmes had joined Oberlin College and graduated in 1993. Later, to continue her education, she further enrolled at Lewis & Clark Law School of Portland in 1997. After graduating from Lewis & Clark, she shifted to Bloomington, where Linda did a job at Minnesota Legislature’s research department and Minnesota Department of Employment and Economic Department. She had taken a bar exam in Minnesota before moving into Bloomington.

Linda also worked as a lawyer during the year 2001 and as writing recaps for now-retired ‘Television Without Pity’ website until 2007. After a year, she got indulged at ‘Monkey See,’ National Public Radio’s pop culture blog, which became a significant turning point in her career.

Linda, whose age is 49, as of now, was not married and had no children until 2018. Her tweet of 13 August 2018 signified that Linda was often asked about why she is not married.

Linda replied to the fans' queries painfully. She told in her tweet that the question is painful because that could bring hurtful memories of losing someone.

Linda expressed her disappointments when people ask about her marriage on 13 August 2018. (Photo: Linda's Twitter)

At present, Linda has not hinted anything spacious about her marital status. Therefore, it is a mystery as to if she has a husband or is dating someone. Whatever it is, may the smart-mouthed Linda finds someone who is equally smart like her and understands her busy schedule.

Linda has a significant contribution to the NPR and its show Weekend Edition, and All Things Considered. Her salary as an NPR Correspondent is not provided, but she must be garnering its highest salary, which is estimated to be $63,000 annually, ranging the lowest $26,000 to an average $40,000.

You May Like: Carter MacIntyre Bio, Married, Family, Net Worth

Besides, Linda is a novelist, who authored the novel Evvie Drake Starts Over, which is all about love, tragedy, baseball, and the state of Maine. Not to forget, she has her website, thisislindaholmes.com, where her fans could learn more about her.