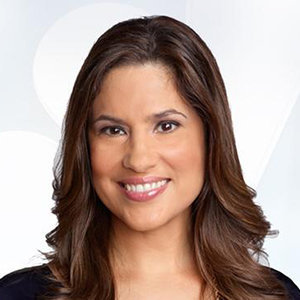 During her journalism career, Lynda served as an associate producer of WCBS-TV, WCAU-TV, and WNJU-TV. The two-Emmy-winning correspondent traveled to Spain and Mexico for on-location productions while working on WNJU-TV.

Married Since 1997; Two Daughters With Husband

WNBC news correspondent Lynda Baquero is married to Richard Baquero since September 1997. Her interior designer husband, Richard, who has a Manhattan-based luxury interior design firm, is an owner of RAB/ID Design.

The couple, who are exulting their more than two decades of togetherness, went for a date night in June 2017. The NBC 4 New York’s consumer reporter and her husband Richard arrived at Rocco Steakhouse in Madison Ave, New York and feasted the Italian-accented dishes.

Together, the couple has two children, Illeana Baquero, and Carolina Baquero. They welcomed their elder daughter Illeana in 2003 and rejoiced the birth of their second daughter Carolina in 2005. In January 2018, the family of four arrived in Deer Valley Resort in Park City, Utah and relished the skiing and bike ride in the chilly winter. The couple's daughter Illeana and Carolina race down over 50 mph and enjoyed their ski vacation.

How Much Is Lynda Baquero's Salary & Net Worth?

Lynda, 51, accumulates her net worth from her career as an American reporter/correspondent. According to indeed.com, a reporter in New York earns an average salary of $50,499 per year. Lynda, who is working in NBCUniversal, Inc., since October 1995 is gathering some lucrative amount of earnings.

She serves as a correspondent for WNBC news and hosts the long-running series Visiones. Before joining NBC, Lynda worked as an anchor/reporter of NY1 News from June 1992 to October 1995. The Emmy-recipient also shared the tips regarding weight loss in 2015.

She and her husband Richard Baquero bought a 2100 square-foot apartment in the Sutton Place neighborhood in August 2011. Their 30th-floor apartment contains a three-bedroom and 450-square-foot living room. Her interior designer husband painted the living room walls in a black color, and Lynda kept her two Emmy's in the family/media room where their children reside.

Lynda Baquero was born on 16 January 1967 in New York City, New York as Lynda Lavergne. She grew up in Manhattan with her Puerto Rican ancestry family. The Emmy Award-winning reporter stands at the casual height.

In 1998, she received a local Emmy Award for her coverage of Bishop of Rome Pope's visit to Cuba. Further, in 2006, Lynda secured second Emmy for 'Best Evening Newscast.' Lynda completed her education from the New York University where she received a degree in broadcast journalism.