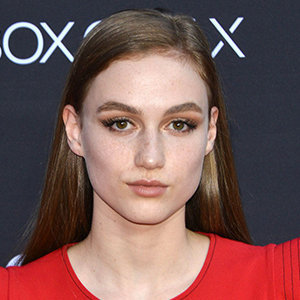 Despite her young age, American actress Madison Lintz has tons of experience in the acting field. She started acting as a six-year-old kid and has since made a strong foothold in the competitive industry.

Likewise, Madison has also made her presence known in the silver screen with her performance in movies like After (2012), and Along Came the Devil (2018).

As of now, Madison is in a relationship with a guy named Jackie Kay.

The couple's romance came to light after Madison shared a photo of herself with her boyfriend enjoying a vacation in Nassau, Bahamas, in January 2020. Prior to dating Jackie, Madison was involved with another guy named Wesley Rodenstine. The couple's relationship came to light in March 2016 after Wesley shared a photo of himself with Madison. The couple's romance lasted for over two years, but eventually, it came to a stop. The last time the actress mentioned Wesley as her boyfriend was on 7 May 2018. On that day, she shared a tweet to describe Wesley as an ideal boyfriend as he evidently waited for Madison at an airport for over an hour and a half before her flight had even landed.

Madison stands at a height stretching 5 feet 9 inches (1.75 m) from the ground.

A native of Atlanta, Georgia, the actress was born on 11 May 1999. As she started her acting career at the young age of six, Madison was homeschooled most of her schooling years.

Madison comes from a family of actors. Apart from her father Marc Lintz, all the members of the Lintz family are involved in the entertainment business. Madison's family consists of her parents: Marc and Kelly Collins Lintz, brothers: Matt (born: 2001) & Macsen Lintz (2006), and an elder sister named Mackenzie Lintz (1996).

Her mother Kelly is known for her performance in movies like Gifted (2017), The Accountant (2016), and The Mist (2007). Likewise, Madison's siblings have also set their feet in the acting industry.