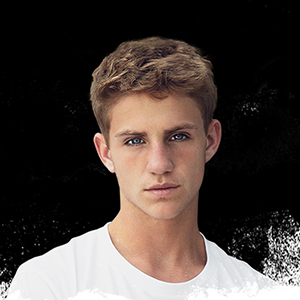 MattyBRaps is a popular rapper, who started rapping after his 19-year-old rapper cousin moved in with his family. MattyBRaps started singing his lyrics to his cousin and made the video Eenie Meenie (May 2010) which was able to attract over 500,000 viewers in its first week on YouTube.

Even-since, the talented rapper has leaped a long way making a name for himself in the music industry.

The rapper was also featured in the Top 21 Under 21 list by Billboard Magazine in 2013.

Born to father Blake Morris Sr. and mother Tawny Morris, Matty has four siblings in the family. Three of them are his older brothers: Blake Morris Jr., John Michael Morris, and Joshua Morris, while the fourth is a little sister named Sarah Grace Morris.

Don't Miss Out: Is DeStorm Power Married? Insight His Personal Life & Net Worth

Matty's brother Blake works as an investor, songwriter, record producer, and overall manager for him. Meanwhile, Joshua is a YouTube star known for posting pop-culture videos on his YouTube channel, JeebsTVVids. Similarly, his younger sister Sarah is also an internet personality with over 668K followers on her Instagram page.

MattyBRaps can be seen getting cozy with a beauty named Brooke Gallagher. She started appearing in his Instagram posts since April 2019. Before getting close to Brooke, MattyBRaps was in a relationship with a competitive cheerleader and model named  Kate Cadogan since June 2013. After dating for a while, they split in 2014. They again reconciled their relation in summer 2017 but, things didn’t seem to have worked for the couple and Kate completely disappeared from MattyBRaps’ radar after September 2018.

The singer's successful career has inevitably attracted immense fame and wealth in his life. According to celebritynetworth.com, his net worth was estimated to be around $3 million in May 2017.

MattyBRaps started his music career in 2010. His first release was the remix of Kylie Minogue’s song I Believe in You which was published on 22 June 2010. Later, he collaborated with James Maslow to release his original song Never Too Young in 2014 and with Maddie Jane in Love Somebody. The covers were released following his first original song Forever and Always that came out in September 2011.

Furthermore, he made his TV debut from The Wendy Williams Show in November 2010. After the debut, he made guest appearances in several TV shows like Entertainment Tonight, Dance Moms and Dr. Phil.

Some Interesting Facts About MattyBRaps Including Age