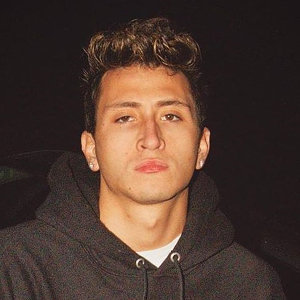 How can someone handle the multi-dimensional career progression even at a young age? Probably, Mikey Fusco can answer this question. He is only 20 years old, as of now, but he has already reached a greater height in dance, music, and acting.

As a dancer, Mikey, along with his team, the ICONic Boyz, achieved the second position on the sixth season of America's Best Dance Crew.

To the dismay of fans' curiosity, an aspiring dancer, and a rapper, Mike Fusco is not dating anyone at present.

He has kept his current personal and romantic affairs far from public attention. However, Mike, who does not have any girlfriend and love interest currently, has had talked about his romantic life on social media in the past.

From the look of it, he was still single in the year 2016. On his tweet in February 2016, he was even wandering to find a Valentine.

Since then, Mikey has never been spotted talking about his sweetheart, nor has he been spotted with the lady whom he would call a girlfriend.

With the secluded dating life, now, he is enjoying singlehood.

Mikey Fusco started dancing at the young age of twelve.

After moving to Los Angeles, Mikey pursued training under the best acting coaches. With consistent work in dance, he made his breakthrough through the sixth season of the reality show, 'America's Best Dance Crew’ as part of ICONic Boyz in 2011.

After America's Best Dance Crew, Mikey emphasized his music career and started to work in three genres, including rap, ballads, and pop.

Similarly, he has worked on the projects alongside some of the most influential record producers, including team Da Internz, and Brian Kennedy. Both of the record producers are known for collaborating with Rihanna, Nelly, Chris Brown, Kelly Clarkson, and Backstreet Boys.

Besides that, Mikey is also a skilled rapper and musician. As a singer, he is prominently known for his hit songs, including Visions, MINDLESS, One Of A Kind, Run Free, and On My Side. In 2017, Mikey replaced Josh Levi of the pop group Citizen Four and joined the group.

Born in 1999, in New Jersey, Mikey Fusco celebrates his birthday on 26 February every year. He, who is famed for his outstanding dances and rap songs, grew up with his sister, Nicolette Fusco, in his family.

During the childhood, Mikey and sister Nicolette moved to Los Angles along with their parents. There, Mikey enrolled at a high school on the West Coast in February 2014. Before that, he had attended the Carl Sandburg Middle School in New Jersey.

Mikey Fusco's sister, Nicolette, is also a prolific dancer like him. She started dancing since her young age, and throughout her career, she has danced at ICON Dance Complex.

Similarly, Nicolette serves as a dance teacher at The Dance Factory. The graduate of Rowan University has been working with the entertainment company based out of 4 Artillery Rd, Lufton, the United Kingdom, for over a couple of years since September 2017.