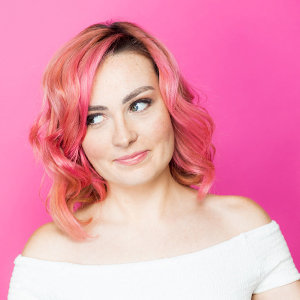 Molly Burke, who lost her vision at the age of fourteen after she suffered from Retinitis Pigmentosa, never tumbled down in her career goal and moved forward to become a motivational speaker. Working on the interests, Molly carved herself into a fine activist. She is known for her stories at We Day events across the world.

Apart from motivational speaker, Molly, a successful YouTuber, is also the Miss Teen Canada International 2013. For her social activities, she was even awarded an Oakville YMCA Peace Award.

Molly's Relationship; Is She Married?

Concerning her social updates, Molly Burke was linked to multiple guys. Back on 5 March 2015, she tweeted that she had a boyfriend named Matt, who often used to accompany her in a Q&A video on YouTube.

Similarly, her tweet on 31 May 2015, one of the fans asked her how did she upload videos on YouTube. In reply, she mentioned her boyfriend's support on her career and used to upload the videos on her channel. Indeed she was talking about her man, Matt.

However, in April 2017, Molly surprised her fans after she uploaded a video on YouTube with the title "BOYFRIEND TAG!?" Her fans were confused with her connection with Braden, who is a gay motivational speaker by profession. In the video, she told they first met in Los Angeles. However, the two has a bonding nothing more than a best friend. Molly even clarified through her video description saying;

"For those who may be confused, Bradon is one of my absolute best friends. I am so blessed to have him in my life and I wish everyone could find their own Bradon. Given the nature of our friendship, we often get confused for being a couple because we're just so close, and due to this we always joke that we're boyfriend/girlfriend even though we clearly are not/would never be." Shattering all the rumors, Molly Burke has clarified that she indeed is single now. She too tweeted about her singleness on 21 August 2018.

The Canadian activist is not married and has no husband at the moment as she has not traced any details of her possible love interests.

How Much Is Molly's Net Worth?

Molly Burke, age 25, is a motivational speaker and a YouTuber and has been accumulating a fruitful amount of net worth and fortunes from her career. She created her YouTube channel, Molly Burke on 10 July 2014 where she swirls several tutorials on makeup, fashion, and music backgrounds. As per socialblade, Molly Burke has over 1,835,896 subscribers and has the median income ranging between $1.2K - $19.3K per month which makes $14.4K - $231K of worth in a year.

As a motivational speaker, she has enrolled herself in several activities and has worked with the activists including Archbishop Desmond Tutu, Martin Luther King III, and the Kielburger brothers. Furthermore, she also has shared the stage with high-profile celebs like Martin Sheen, Macklemore, and Demi Lovato.

Apart from that, the 25-years-old lady previously served as a correspondent at the TeenNick Halo Awards in Los Angeles in 2013. She also joined Me to We’s speakers’ bureau, where she shared her story with 20,000 listeners at the ‘Air Canada Centre’ in Toronto.

You Also Need To See This: Madison Haschak Wiki, Net Worth, Boyfriend

Son of Niamh and Peter, Molly Burke was born in 1994, in Toronto, Canada, and she blows the birthday candle on 8 February. Molly, who barely stands at the height of five feet, belongs to the white ethnicity and holds a Canadian nationality. Her family raised her with her brother, Brady in Oakville, Ontario. She resembles her mother as her best friends.