Did Nancy Newman always know she wanted to be on camera? Let's have a look.

In the 2004 Olympic Games held in Athens, Greece, American sportscaster Nancy Newman served as an event reporter highlighting one of the world's foremost sports competition to the public. She is also the one who won Emmy-Award for her coverage of the NHL Atlanta Thrashers inaugural season. The on-screen personality on YES network serves as a studio host for the New York Yankees and the Brooklyn Nets pregame and postgame shows. Nancy holds a variety of sports broadcasting positions and has hosted several Emmy-Award-winning coverages.

Sportscaster Nancy Newman is a versatile anchor and reporter currently working for the 'YES Network'. In an interview in Sports TV Jobs, Reporter Newman was asked, "Did you always know you wanted to be on camera? Why on camera?" She replied that she actually didn't know she would end up on camera. She added, she absolutely wanted to give it a go when the opportunity to report on-camera came up.

"When the opportunity to report on-camera came up, I absolutely wanted to give it a go. I had always loved sports and had grown up with them. My father would take me to hockey, baseball, and football games from the time I was a young child, and we had great fun enjoying our teams and everything about them."

How did she kick off her career in TV?

Newman started her career as a radio personality in Barrie and joined Scarborough Cable 10 in 1988, where she ended up as sports director. Then she freelanced for CHCH-TV in Toronto and TSN, including on horse racing and motorsport programs. And when she was chosen, out of hundreds of candidates to replace Hannah Storm at CNN Sports and CNNSI, she began using her mother's maiden name, Newman, on-air in 1992.

In 2003, Newman joined YES Network as a host/anchor for the New York Yankees PreGame and postGame Show and hosted Yankees Magazine, the official magazine show of the New York Yankees. In addition, Newman was a Reporter for NBC at the 2004 Olympics Games in Athens, Greece, and her notable coverage includes NHL Atlanta Thrashers inaugural season, Goodwill Games Preview, and Toronto's National Hockey League Awards Ceremonies. 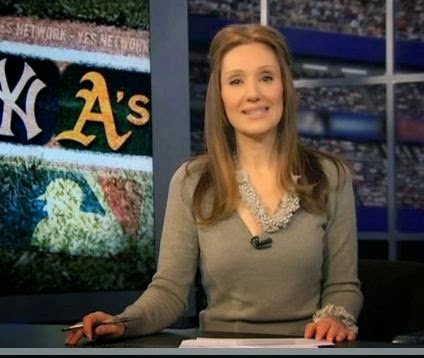 How wealthy is Newman? A look at her net worth and salary.

In keeping with sources, award-winning sportscaster Newman holds a net worth of $1.2 Million, which she accumulates for her TV career as an American sportscaster. According to Payscale, the salary of the host/anchor is $57,243 per year with additional compensation of $5000 as a bonus amount. Nancy, who has been working for nearly two decades, is amassing some decent salary and fortunes.

Growing up with dad and sports.

She had always loved sports and had grown up with it. Her father would take her to hockey, baseball, and football games from the time she was a young child, and they had great fun enjoying their teams and everything about them. She would recite stats, discuss in-game strategy with her dad, and she was just plain hooked. She was a girl who loved figure skating but was hugely into professional sports as a bit of a fan, which still holds true through to adult-hood!.

Newman maintains quite a privacy in her personal life; due to her low-key lifestyle, her fans and audience surmise her husband as YES Network's president Mark Newman. However, she has yet to step up and confirm the speculations. As of October 2018, Nancy is reportedly unmarried and is devoted to her sportscasting career. Unlike Nancy's enthusiasm for sports, she has remained a mum when it comes to her personal life. Even during Valentine's Day on 14 February 2017, the New York Yankees studio host tweeted a picture of a spring training stadium showing support towards Yankees with a caption, 'Sundown on the back fields.' However, on 28 October 2018, she shared a snapshot unveiling her three adorable nieces.