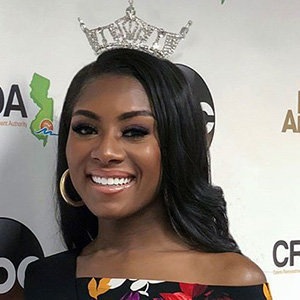 The dazzling vocal of Quando m'en vo' from the opera 'La Boheme' breezed at the Jim Whelan Boardwalk Hall in Atlantic City, New Jersey on 9 September 2018. The performer in the talent section was non-other than Miss America 2019 winner, Nia Franklin.

In the annual show, she mesmerized the judge Carrie Ann Inaba and edged out her 50 fellow competitors securing the Miss America title. Congratulations to the beauty pageant Nia, who outran the top 5 finalists. She is also the winner of Miss New York 2018 and is an advocate for Arts Education.

Nia Franklin, 25, is dating Brooklyn, New York native Dane Alexander. The duo mostly flaunts pictures of each other on their respective social media accounts where they showcased their relationship. The beauty pageant winner was quite happy to spend Christmas with her boyfriend in December 2017 and gushed about the quality time that she spent with him on social media. Taking it to Instagram on 26 December 2017, she captioned, 'On the 1st day of Christmas my baby gave to me: Quality T-I-M-E.'

When Nia reached at the age of 24, her beau Dane expressed his love towards the American beauty pageant winner. He shared a throwback picture of the couple and labeled her as a 'Queen' along with the sweet birthday wish on 28 June 2017. Nia also declared her love towards Dane with the three sweet words during her boyfriend's birthday on 1 October 2017 along with their picture. Further in July 2018, when the Arts Education advocate won Miss New York 2018, Dane accompanied her in the red carpet in New York. The duo flaunted their smile, and Dane proudly shared the snapshot on his Instagram with a caption, 'Me and my Khaleesi. #MissNewYork #MrNewYork.'

Her boyfriend Dane was astounded after she won Miss America 2019. He recited the moment on his social media in September 2018 and shared that his eyes were filled with the tears of happiness after his ladylove coveted the title of Miss America. He thanked all the supporters and friends for providing Nia their support, and yielded that the amount of love he felt during the competition 'was indescribable.' The proud boyfriend of the beauty pageant labeled Nia as a 'Queen' and showed his love towards her. Dari, who is supportive of every footstep taken by the University of North Carolina graduate, further expressed that he would get lonely without her in New York.

Here are some of the intriguing-facts that you don't want to miss about Miss America 2019, Nia Franklin.

How Did Nia Franklin Gather Net Worth?

Nia Franklin summoned the prominent part of her net worth as a beauty pageant winner. As the winner of Miss America 2019, she secured $50,000 scholarship on 9 September 2018, and a year-round job. When she became 'Miss New York 2018,' she acquired $17, 250 as the Scholarship winning amount at The University of North Carolina School of the Arts.

Her other income source includes her stint as the advocate for Arts Education. She gathered revenues from her work with 'Success Academy Charters School' and 'Sing for Hope.' The beauty pageant is also a skilled musician and has performed a segment of the opera La Boheme.

Nia Franklin, who was born in 1993 in Winston-Salem, North Carolina, has her birthday on 28 July. At the age of six, the advocate of arts education composed her first song which had simple lyrics consisting of the repetition of 'Love' and 'hey.'