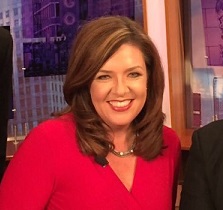 She is the honest and fun loving news reporter of WGN-TV for 6-10 am news and is a three-time Emmy Award-winning anchor. Yes, you guessed it right; she is none other than Robin Baumgarten. The proud Chicagoan joined the WGN-TV back in 1996, and there is no doubt she is a world-class reporter and a family woman who loves her two daughters, Anna and Mary more than anything else.

The graduate from the University of Illinois had a degree in broadcast journalism and started her career at CLTV News where she worked as a traffic reporter. She also spent a year with ABC sports doing freelance reporting. She then worked for WLUP Radio’s Jonathon Brandmeier Show as the sports, news and traffic reporter.

In 1996, she joined the WGN-TV as the airborne traffic and transportation reporter. In 2004, after the expansion of WGN Morning News, she became the solo anchor for the 5 am show and then extended her role to cover 6-10 am hours. The star-studded anchors in the 6-10 am hours include Larry Potash, Paul Konrad, and Pat Tomasulo. The highly rated anchor also reports stories of Chicago and the South Side.

Robin’s Salary and Net Worth:

Similar to another journalist in KGN-TV, her salary is yet to be disclosed, but the efforts that she puts in her job deserve the stupendous salary. The experience reporter who also used to report on ABC and some renowned TV has an expected net worth that inevitably crosses the million-dollar margin.

The reporter who rarely has time off from her duty in the WGN-TV somehow manages to make something for her adorable daughters in the home.

Robin gave birth to her oldest daughter, Anna on 5th July 2002 while she welcomed her second daughter, Mary on 22nd July 2004. Caption: Robin and her daughters on 29th December 2016
Source: Twitter

On the holiday of December 2016, Robin posted the picture of her daughters having a night out to watch the show 'Hamilton rocks,' which reflects the bond that the family has for each other.

Although she reveals every event about her kids, she remains secretive about her husband and father to her children. If wiki sources are to be believed, she was previously married but is now divorced with her husband.

She shared her vows with news producer from Chicago, Matt Piacente. As she maintains a tight-lipped when it comes to his former husband Matt, their marriage date and divorce date are still behind the curtains.

The lifelong Chicagoan, Robin was born in Burbank, Illinois on the 7th day of November 1963 which makes her age 53. The renowned news anchor celebrates her birthday with her colleagues and daughters with overpowering wishes for the WGN-TV and thousands of twitter followers. She was born as the youngest daughter in the family of three kids. She posted a blurry throwback picture on 16th July 2013 of her family in Bozo’s Circus which was taken by his father who called the image the soft focus.