The fashion blogger has become a trend to land a successful career in the fashion industry. Social media star Savannah Soutas also followed the same discourse and gained immense popularity on Instagram and Musical.ly. She has also intensified her popularity on YouTube after she married a fellow musical.ly star. With her tremendous reputation, the social media star has amassed over 3.8 million followers on Instagram and more than 13 million followers on her Musical.ly account.

The fashion blogger has become a trend to land a successful career in the fashion industry. Social media star Savannah Soutas also followed the same discourse and gained immense popularity on Instagram and Musical.ly. She has also intensified her popularity on YouTube after she married a fellow musical.ly star.

Savannah Soutas, 25, is married to a fellow musical.ly star, Cole LaBrant since 2017. Her husband Cole, 21, is an Alabama native known as one of the three members of the Vine channel, Dem White Boyz. Cole was at the age of 19 when he and Savannah started dating in 2016. Nearly after a year, the duo got engaged in January 2017. They took their social media account and shared the happy news of their engagement.

Her then-fiancé, Cole decided to step up and purposed his lady love on 20 February 2017, which she immediately accepted. The social media star then announced their marriage date as 9 July 2017 through her Instagram.

On the post of 10 May 2017, the professional photographer revealed that she would marry her 'forever best friend' after two months (July 2017) and said that her husband Cole had changed her entire life. She also expressed her love towards the Musical.ly star and declared that he was the man that her mom (Deborah Soutas) prayed to come in her and daughter's (Everleigh Soutas) life. Everleigh is her daughter from her previous relationship.

The couple shared their wedding vows on 9 July 2017 and said that they are ready to live there life together as a family. Savannah's daughter Everleigh, who was 4-years-old, also witnessed the marriage ceremony of her mother and new father. 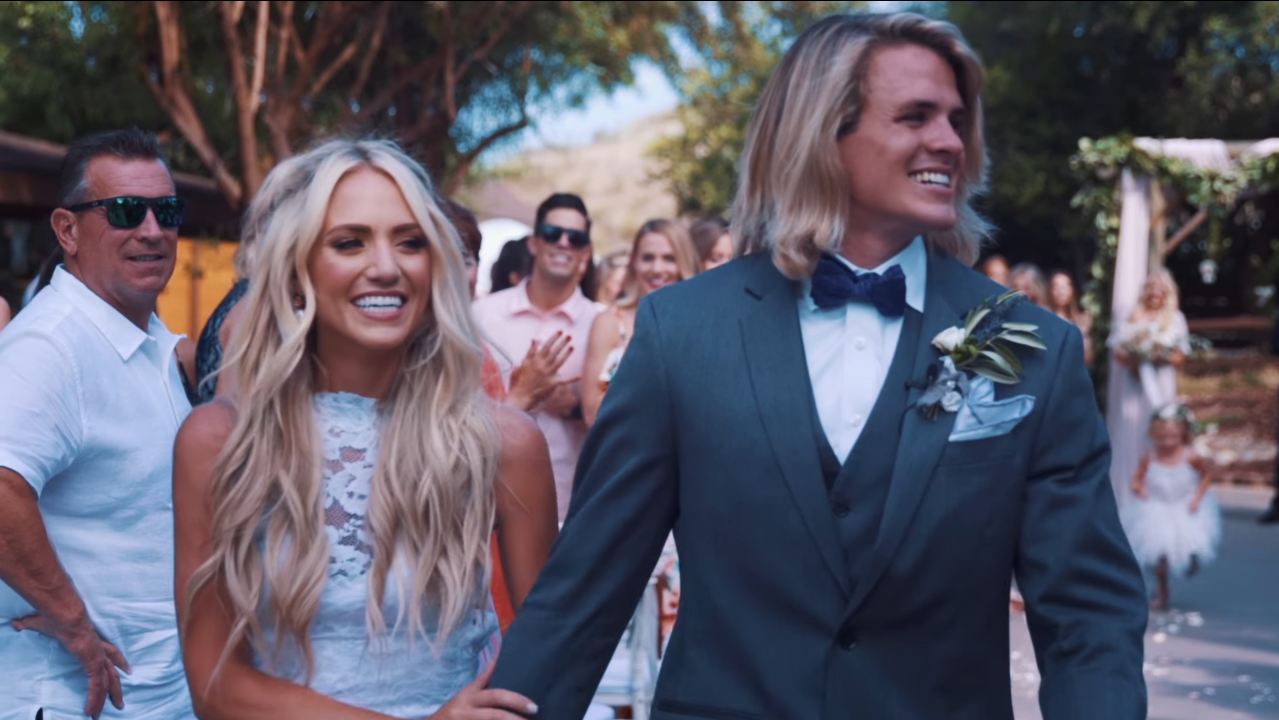 Savannah and Cole added a new member in their family. Their expected bundle of joy, a daughter named Poise Rayne was born on 28 December 2018. Little Poise weighed 6 lb 13 oz during the birth, and Savannah shared the big news during the New Year in 2019, embracing her new-born kid.

Savannah's daughter Everleigh is quite excited to have a little sister. The social media starlet took her Instagram on 10 January 2019 and shared the snapshot of her two-adorable daughters where Everleigh hugged Poise at her arms. Further, on 14 January 2019, Savvanah showcased the moment of the family-of-four who are happily residing in California. Savannah Soutas and her husband Cole LaBrant with their two kids in January 2019 (Photo: Instagram)

She and her husband Cole revealed that they were expecting their first child through their YouTube channel Cole&Sav on 9 May 2018. At that time, they shared a video performing a pregnancy test.

Daughter From Previous Relationship, Who's The Baby Daddy?

Savannah shares a daughter, Everleigh Soutas, 8, from her previous relationship with Tom Smith. The social media star became pregnant with Everleigh at the age of 18. The estranged couple welcomed their daughter in 2012.

Savannah and Tom have also shared their picture along with their daughter on the occasion of Father's Day through their social media. Likewise, while they were in a relationship, the New-York native stated that Tom enjoyed spending time with their daughter. However, the estranged duo split each other and Savannah decided to move on along with her daughter.

What Is Savannah Soutas' Net Worth?

Savannah Soutas has accumulated a net worth of $2 million as a social media star. She and her husband, Cole have been gathering revenues from their YouTube channel Cole&Sav. According to Socialblade, their YouTube channel has estimated earnings between $33.1 thousand to $529.3 thousand monthly and $397 thousand to $6.4 million yearly. Apart from YouTube, she has gathered wealth and fame as a Musical.Ly sensation and has been a popular Instagram star.

During the teenage, she began to take photographs and worked as a model. She became interested in photography and decided to pursue her career in photography. The professional photographer then launched her official website and started to post snapshots on Instagram and videos on YouTube.

Her fans and followers skyrocketed in no time, and she emerged as a successful blogger and a social media star. Later, she also uploaded videos on her Musical.ly account and emanate as a sensation amassing more than 13 million followers.

Savannah Soutas was born on 2 March 1993 in New York. She holds American nationality and belongs to white ethnicity. Savannah stands at the height of 5’ 2” and has the measurements of 32-24-32 inches.

Her mom, Deborah Soutas and her elder sister, Chantelle Paige, has contributed a lot to her successful social media career. As per wiki, the social media star was talented from her young age and started to dance at the age of two.