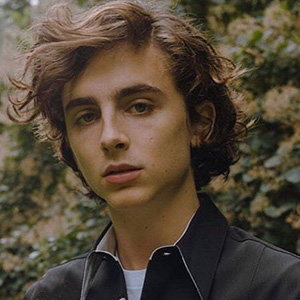 The months of speculations of a potential romance between French-American actor Timothée Chalamet and actress Lily-Rose Depp proved to be out correct. Their chemistry and closeness over the months set a whirlwind which hit the tabloids in no time.

One can remember Timothée by his portrayal of a gay role in the movie 'Call Me By Your Name.' Now, the fans would assuredly cherish him as Henry V in upcoming Netflix movie The King where his ladylove, Lily, depicts the character of his on-screen lover as Princess.

There is a new romance in the town. Call Me By Your Name actor Timothée is officially dating Johnny Depp's daughter Lily-Rose Depp. The duo was recently seen smitten in New York where the lovebirds shared a passionate kiss. The PDA moments of the couple ended the romance speculation of their fans, who would be over the moon to know the tender bond between the fellow French-American actor and actress. Timothée Chalamet sharing a kiss with Lily-Rose Depp in the rainy climate in New York City on 11 October 2018 (Photo: dailymail.co.uk)

The sizzling rain of New York City on 11 October 2018 further added the romantic environment between the couple. Timothée grabbed his girlfriend Lily by his arms donning a black long-sleeved shirt and smooched his ladylove who looked exotic in her white T-shirt and jeans. After sharing the affectionate kiss, the handsome star walked arm-in-arm with the Planetarium actress, and they enjoyed a date night at a food stall in New York.

It is also thrilling that Timothée and Lily will play the role of an on-screen couple in the upcoming Netflix flick The King, which hits the theatre in 2019. Before their relationship, his girlfriend Lily dated Ash Stymest whom she reportedly split in April 2018. Likewise, Timothée was also romantically linked with Madonna's daughter Lourdes Leon.

Timothée's Movies; Played Gay Role In 'Call Me By Your Name'

After debuting in the Hollywood industry at the age of 12 from the short movie Sweet Tooth, Timothée Chalamet landed his acclaimed role in Law & Order playing a murder victim. Since then, the French-American actor has never backed up and has starred in several flicks and TV series. His movies like Interstellar, One and Two, Hot Summer Nights, and Hostiles are just a few names that Timothée heightened his career in Hollywood.

While most of his movies and TV series are at the peak, there is one name that most people do not forget, Call Me By Your Name. Timothée starred as Elio Perlman in 2017, landing a gay role with fellow actor Armie Hammer in the Luca Guadagnino directed flick. His character as Elio reminds the actor of his childhood difficulties where his family had gay coupled friends, and he wanted to be a straight teenage boy.

Born as Timothée Hal Chalamet on 27 December 1995, Timothée has his hometown in Hell's Kitchen, New York City, New York. His American mother Nicole Flender was a Broadway performer while his French father, Marc Chalamet, worked as an editor for UNICEF. While growing up, he went to his father's native town in France to spend summer.