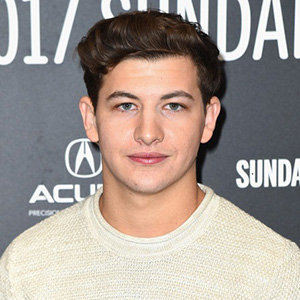 Tye Sheridan was shot to fame-light after playing the character Cyclops/Scott Summers in the X-Men movie franchise. He had not thought of getting involved in acting during his young age. But, after he started acting, he immediately knew what he wanted to do with his career and fell in love with the profession.

Since his involvement in Hollywood, Sheridan has debuted in hit movies, including The Mountain, Dark Phoenix, X-Men: Apocalypse, Scouts Guide to the Zombie Apocalypse, The Stanford Prison Experiment, and Joe.

Gay Or Has A Girlfriend?

The 22-years-old actor Tye Sheridan possesses the low-key lifestyle. When it's about his love entanglement, he has remained taciturn and kept his possible relationship away from the media reach.

However, Sheridan was once rumored to be dating his X-Men co-star Sophie Turner in September 2015. Two of them had shared on-screen romance as a couple in the X-Men franchise. Tye portrayed the role of Scott Summers, a.k.a Cyclops and Sophie played Jean Grey, a telepathic and telekinetic mutant.

On the screen, both of them belong to the group of first five members of Xavier's institute in the X-Men universe. It was difficult for Scott and Jean to have a stable relationship due to chaos in the universe and the involvement of Wolverine in the budding romance. However, in real life, there were rumors of them having an affair. Regardless of the dating speculation, Tye and Sophie are not romantic duos as Sophie has already tied the knot with Joe Jonas in a surprise ceremony held at Las Vegas on 1 May 2019. The newlywed engaged back in October 2016 after dating for almost a year.

As for the Texas-born actor Tye, his relationship status is yet to be explored. He likes to keep his relationship in the dark away from the public, which might have fueled the rumor of him being gay. However, he has not come forward to talk on the matter of his sexuality.

After his debut in the film industry from the feature film The Tree of Life in 2011, Tye landed his first lead role in the crime-drama Mud in 2012. Down his road to success in the industry, he has featured in several acclaimed movies surprising his fandom with his charms and magnificent performance. His few acting credits include X-Men: Apocalypse, Deadpool 2, Dark Places and few more. Likewise, he also had portrayed the role of Justin in the TV series, the Last Man Standing.

As of 2019, Tye is set to appear in the drama film, The Night Clerk as Bart Bromley. Also, he will be debuting on the up-coming movie Voyagers.

Note: The median salary of an actor is estimated to be around $20k-$270k per year.

Hailing from Elkhart, Texas, the US, Tye Sheridan was born on 11 November 1996 with the birth name Tye kayle Sheridan. He attended Elkhart Independent School District in Elkhart, Texas. During his early childhood, he grew up spending most of his time outdoors fishing and hunting.

Talking about his family, the X-Men star was grown up by parents Stephaine Wright Sheridan and father, Bryan Sheridan. His mother was a beauty salon owner, and his father was a UPS employee. He was raised in a middle-class family alongside a sister Madison Sheridan.

On his physcial attributes, Tye stands at the height of 1.7m (5 feet 7 inches) with an average build and has a weight of approximately 71kg.