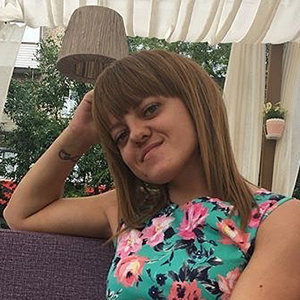 Social media account Uma Kompton is a catfish that stole a picture of a young Russian woman named Natalya Ulyanina. They shared several posts that revolved around vulgarity and socially volatile topics in Uma's name violating the privacy of Natalya. The Uma Kompton troll is renowned as a musical artist who has several discographies like Stripping for Jesus and Hey Rat.

The Uma's Instagram account is a reminder for all of us that we should be aware of our privacy and protect our digital identity while venturing on the social media platforms.

Uma Kompton Is Fake; Where Is She Today?

Uma Kompton is not a real person whose picture got ripped off from the 30-year-old Natalya Ulyanina's VK page (Russian version like Facebook). The troller created such a controversy that they shared photos of Natalya under Uma's name on Twitter and Instagram and provided the false information claiming that she is married to her cousin.

Initially, Natalya and her husband Evgeny Ulyanina who worked for a stretch ceiling company in Moscow area had no idea that her fake account was spreading across social media. The couple was from Russia, and the 'Uma Kompton' name was going viral in the United States.

You May Like: Wanda Hutchins Wiki, Age, Net Worth, Michael Strahan

After Evgeny and Natalya, who is at the age of 30, became aware they were the victim of identity theft, Buzzfeed promised to crack down the imposter, and the Twitter account under 'Uma Kompton' received its deserved suspension. Natalya Ulyanina and her husband, Evgeny Ulyanina shared by the fake Instagram page under the name 'Uma Kompton' on 11 November 2018 (Photo: Instagram)

Today the Twitter account under 'Uma Kompton' no more lurks across the internet but the fake Instagram page of Uma which claims that she is a proud mother of three and an anti-bully advocate is still there gaining over 199k fan followers.

How Much Is Uma Kompton Net Worth?

Although Uma Kompton is a fake name, the troller enjoyed the net worth gaining fame as an American singer-songwriter. According to Payscale, the average salary of the musician in the United States is $39,390 yearly, and their revenues range between the amount of $15,388 to $100,711. Uma created several songs and released the single titled 'By the Rivers' on iTunes.

Under the self-named record label, the Uma Kompton troll released the albums like The Trial of Uma Kompton, Stripping for Jesus, and Hey Rat.

But when it comes to the victim Natalya Ulyania, she is not a musical artist and works in a Russian stretch ceiling company with her husband, Evgeny.

The victim of an internet troll under the name 'Uma Kompton,' Natalya Ulyania was born in 1988 and celebrates her birthday on 8 April. As per wiki, Natalya grew up with her Russian parents and holds Russian nationality. Nataliya stands at the decent height and carries a birth sign as Aries.