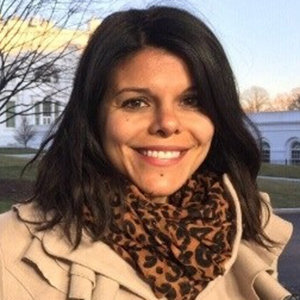 American journalist Vivian Salama is one of the courageous reporters who covered the ISIS's blitz across Iraq and Syria as the AP's Baghdad bureau chief. She now works highlighting the national security and foreign policy under the Trump administration as the Wall Street Journal's White House reporter.

During her journalism career, Vivian worked as a freelance journalist traveling between the United States and The MiddleEast. She was also the correspondent of Bloomberg in the Middle East. While on Bloomberg, she covered Arab Spring, European financial crisis, and several hot stories.

White House Reporter Vivian Salama is married to Boone native, Joe Salama. According to her husband's LinkedIn profile, he is a Chartered accountant. The couple resides in Greensboro, North Carolina and has two children named George Salama and Michael Salama. Their son George rejoices a married life with his wife named Carmen.

In her family, she has two sisters named Venise Fayez and Rosette Attia and a brother named Ragui Marcos. Her sister, Rosetta resides in the UK with her husband, Maher Attia whereas her another sister Venise in Cairo, Egypt with her husband, Rafik Selim Wassef. Her brother Ragui lives in Fremont, California.

Vivian's mother Charlotte Georges Farag whose origin lies in Cairo, Egypt died at the age of 85 on 3 November 2013. Her burial took place in the Sacred Heart Cemetery in Boone. Meanwhile, Vivian's father took his last breath long-time ago before her mother's death.

How Much Is Vivian Salama's Salary And Net Worth?

Vivian, 38, summons the net worth from her career as an American journalist. According to Glassdoor, the average salary of the Wall Street Journal Reporter is $76,256, and their income ranges between the amount of $54,000 to $107,000. Vivian, who is working on the Wall Street Journal as a White House reporter since May 2018, is accumulating some handsome amount of payrolls.

Before joining the Wall Street Journal, she had worked as the Political Reporter at NBC News in Washington from September 2017 to May 2018. AP's Middle East news director Ian Phillips announced the appointment of Vivian as the Baghdad bureau chief for The Associated Press in June 2014. The American journalist succeeded Adam Schreck and served as the senior reporter leading the team of photographers, video journalists, and reporters. She also served as a White House Reporter of The Associated Press in DC Metro Area from January 2017 to September 2017.

Vivian Salama, who was born in 1980, is a native of New City, New York. The American journalist has remained mum regarding her birthday. The courageous reporter stands at the decent height and holds American nationality.

Vivian can speak Arabic and graduated with a master's degree in the Middle East and Islamic Studies from Columbia University. As per wiki, the journalist is also a graduate of Rutgers University in New Jersey.