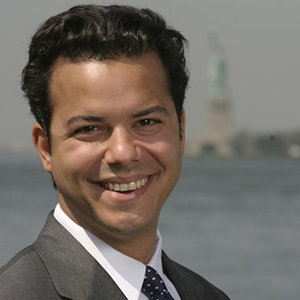 Senior Political Analyst John Avlon shaped his career since his teenage as a media personality now relishes many successes in his life.

Not just in professional life, but he relishes his personal life and is a devoted father and husband. Married to a former senior advisor, he is a one-woman man and has been married for almost a decade.

The couple, who met at Rudolph W. Giuliani’s presidential bid in 2008, engaged on 21 November 2008. After a year of the engagement, they shared their wedding vows on 7 November 2009.

John Avlon shares his blissful moment with wife and states, Love is a verb; it’s not the flu. Margaret also pictures her husband as a role model and learns life lesson of anticipating people's intentions.

Read This: Why is Chip Hailstone in Jail? His Crime, Arrest, Net Worth, Personal Life, Bio Furthermore, the couple has savored their life spending time together with family and kids and has never missed prioritizing their family above anything else.

The father of a son, Jack Avlon, age 5, and daughter Toula Lou cherishes every moment with them. He has even celebrated his daughter's first day of pre-school. He reflects his devotions to his family by posting major events of their kids of his social media. He gives immense thought celebrating his son Jack Avlon birthday and even takes a day off to dedicate a whole day to family.

John Avlon's Net Worth; How Much Is His Salary?

John Avlon is a Political Analyst and fill-anchor at CNN, who summons his net worth from the professional career of media and network. As per PayScale, an average salary at CNN is $66K per year. Therefore, as an anchor at CNN, he might have summoned a massive income over the course of his career.

John Avlon stepped in the field of media and network as the youngest speechwriter for Mayor Rudolph Giuliani, and he later became the Director of Speechwriting and Deputy Policy Director for Giuliani's 2008 presidential campaign. He also joined The Daily Beast in 2008 and became editor-in-chief in 2013. Then he started hosting Wingnut of the Week in CNN. In 2018, he became a Senior Political Analyst, where he made his daily appearances on the News Day and also guest anchored for the programs like State of America and Reliable Sources.

He is also a writer known for various books and articles including the Independent Nation: How Centrists Can Change American Politics and Wingnuts: Extremism in the Age of Obama. John has been honored with the National Society of Newspaper Columnists' Award for the best online column in 2012.

The native American pursued his education from Milton Academy in Milton, Massachusetts. Later he joined Yale University from where he earned his bachelors degree, and he did his MBA degree from Columbia University.