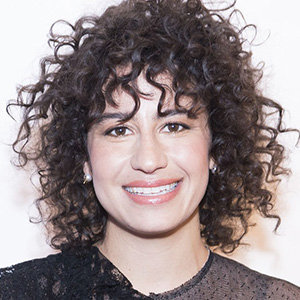 Broad City, a series that follows two women throughout their daily lives in New York City. Ilana Glazer one of the stars praised for her outstanding acting in the series. Ilana is an equally talented actress and writer.

Ilana is known for acting and co-creating the Comedy Central series Broad City. Other than her Comedy Central show, Ilana has also starred in the 2017 comedy, thriller movie, Rough Night.

Ilana is married to David Rooklin, a co-founder of Redesign Science. The pair, who has distinctive work-craft, had an unexpected meeting. They met each other at the backstage of Hannibal Buress comedy night in Washington Square Park, where they had a love at a first sight. However, there is no concrete evidence of when the couple's instant connection turned into dating.

Nevertheless, in June 2013, Ilana first gave a hint about their relationship when Ilana shared a photo of her boyfriend on Instagram, where she wrote: 'I love him."

The comedy star prefers to keep her personal life a low-key and does not like the media's attention on David. Speaking with The New Yorker on 23 June 2014, she confirmed she didn't feel comfortable with David being interviewed by them.

Later on, Ilana and her longtime beau, David got married in a super secretive way. The pair reportedly shared the wedding vows at City Hall on 26 February 2017, and the news breaker of the couple's marriage was writer and director, Chioke Nassor. Chioke shared the picture of the newly-wedded pair on his Instagram, where he wished them happy matrimony. Following their private wedding, the love-duo went for a honeymoon at the cool and ever-trendy, Iceland. As of now, thier marriage has exceeded into two years of togetherness, and Ilana and her hubby stills maintain the strong relationship.

What Is Ilana's Net Worth?

Ilana also acquired a huge net worth of $3 million as being an actress and a writer. She has been part of the Comedy Central Show. Her breakthrough was as Ilana in web-series Broad City alongside his co-star, Abbi Jacobson. She has also starred in the movies like The Night Before and Rough Night. Likewise, she has also appeared in episodes of the TV series Inside Amy Schumer and Bojack Horseman.

In 2014 and 2015, Ilana was nominated for Critics' Choice Television Awards for Best Actress in a Comedy Series for her work in Broad City. She was also nominated for a Writers Guild of America Award for Broad City in 2016.

The hot comedian was born as Ilana Rose Glazer on 12 April 1987, in Long Island, New York. She was born in the Jewish household of parents, Sandi (Wexler) and Lawrence “Larry” Glazer. She posses Ashkenazi Jewish ethnicity. Standing at the height of 5' 1", she has sexy a body measurement.

Ilana earned her high schooling diploma from Smithtown High School in Smithtown, New York. Later on, she went on to pursue the majors in psychology from New York University and graduated in 2009.