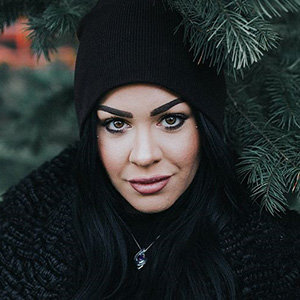 People choose different forms of art to bring out the emotion. Similarly, Nikki Simpson chose tattoos to portray her creativity in the skins of her clients. Tattooing gets her in the meditative state as she gets to throw her heart and soul into the piece of art.

Nikki got the fame from her appearance on the eighth season of the Spike television series, Ink Master. Though she stood fifth in the show, she impressed the world with her skills and got fame as one the best tattoo artists in the country.

Nikki's Fame From The Ink Master

Ink Master is the show that changed Nikki's life forever as the world recognized her from the show. She had done some fantastic works on the show and was praised by many. With fame, she also got three beautiful girlfriends in the show. Though the show was full of arguments, she along with her three ladies stood united among all other contestants.

After the show, these four came with an idea to start a new show, Ink Masters: Angels. In the show, the ladies traveled from city to city to find the best tattoo artists from each city. The finalist from each city would compete in with one of the angels to show whose works come out to be best. One of the angels of the show, Gia Rose, had to leave the show and will never be seen on screen because she is diagnosed with cancer.

Apart from the screens, she is adding more tattoos on her book working from the Grit N Glory tattoo shop in New York. She also shows her works on Instagram which is loved by 170,000 followers.

The Tattoo Angle's Love For Her Tattoos

Nikki, 27, says she started creating arts since she could hold a pencil in her hand. The passion for art helped her create her first tattoo at the young age of 19. Now, she loves her work so much that she does not even want to see her tattoo leave the shop. The artist loves how her clients connect to these tattoos emotionally. When there are stories and emotions behind the work, she gets motivated to give her best.

Her body itself is like a canvas with the masterpiece. Every part of her body is covered with the finest tattoo art completely complimenting her personality.

Nikki's Romance With Her Musician Boyfriend

Even her partner Tim Goergen’s body is decorated with tattoos, who is the vocalist for Within The Ruins. We can see the connection between the two from the tattoos in their body. Maybe the similarity between the two is the thing that'll make Nikki choose Tim as her partner if she has millions of lifetime. Its been two years the two are supporting each other as a best friend and companion. She wished her boyfriend on their 2nd dating anniversary saying that Tim has come as a blessing in her life and his arrival has turned her into a better woman. She thanks him for bearing with her in every silly moment and says she can’t wait to make life plans together.

The famous tattoo artist was born in 1991 and celebrates her birthday on 2nd September. As per wiki, she was born in LA, California. She is seen showing love to her parents on her Instagram. She posted a family picture on the occassion of Mother's Day in 2017 and mentioned how precious they are.

We can also see a significant weight loss on her Instagram pictures. Her colorful tattoos are even more enhanced with the addition of curves in her body.